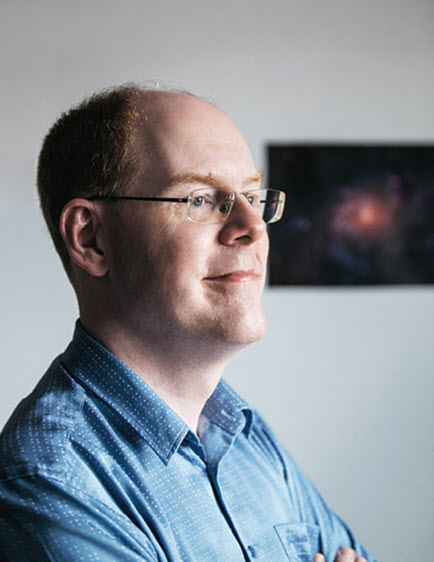 This year, you were awarded the Breakthrough Prize in Fundamental Physics as part of the Event Horizon Telescope Collaboration. Congratulations! Also known as the “Oscars of Science”, the Breakthrough Prize is endorsed by powerhouses such as Mark Zuckerberg and Sergey Brin. Can you tell us a little bit about the prize, and how you felt upon receiving it?

The Breakthrough Prize is an important prize. First, it’s a big prize for the fundamental sciences, as the name suggests. As far as I know, the prize was designed to be complementary to other famous prizes like the Nobel Prize. The Nobel Prize can only be awarded to individual people – up to three people – but the Breakthrough Prize can be awarded to large groups of people as in case of the Event Horizon Telescope, where hundreds of people were part of the team. This makes it possible to recognize groups of researchers that together work for one goal. The prize, I think, is important especially because it recognizes the modern way science is done; with large international collaborations.

The Event Horizon Telescope (EHT) Team is an international collaboration consisting of 347 scientists from over 20 research facilities located all over the world. We’re curious as to how roles are divided amongst so many participants, how many Korean scientists are involved, and what the collaborative process looks like.

Well, as you can maybe imagine, it’s complicated (laughs). We constructed a global network of multiple telescopes that observe the same target at the same time. This means that you need to set up this collaboration of multiple observatories, which alone is technically and organizationally very demanding. You also need people who actually observe the galaxy, or the black hole in this case, and you need people who actually analyze and interpret the data. All of these people are experts who are spread around the world. You need organizations that pay for all of that, too. It was bit like a club, or a learned society, I should say. There’s a director, a scientific director, a board of directors that comprises the stakeholders, and multiple working groups that actually work on many different aspects of this project.

As for Korean nationals, it depends on how you count, but I think 10-15 people were involved. There were 6-7 people in KASI (Korea Astronomy and Space Science Institute), then it was me here at SNU, and there were few other Korean nationals around the world in various research institutions.

Last year, the EHT Team published the first-ever image of a black hole. Can you give us a brief introduction to EHT’s black hole observation research? What role have you been playing in this project?

We worked with eight telescopes around the world. It’s a system in which each telescope looks at the same target, the galaxy M87, at the same time. When the radiowave comes in, the antenna converts it into an electric signal. Then you take the signals from each antenna into one central computer, and use certain mathematical theorems to convert the data into image. To put it simply, we had a network of antennas, and each antenna worked like a pixel for a camera. Of course the problem is that eight pixels are not very much. So one thing you do is you wait a few hours because the earth is rotating, which means that the image is also rotating. Then you can cover more pixels.

Currently, I’m working on analyzing and interpreting various data using computer simulations. The biggest role I’ve been playing myself for future images is remodeling the Seoul National University Radio Observatory (SRAO) so that it will be available for observation of black holes. Actually, one of the antennas needed for this kind of observation is already here on campus. We just need to make it work now.

I understand that the EHT project is currently composed of 8 radio telescope facilities from all over the world, and that there are plans to add more observatories to this array in 2020. Is there any possibility of the Seoul National University Radio Observatory (SRAO) being included?

The answer is basically yes. We need a radio telescope that can observe at high radio frequency, and we have one telescope right here on campus which can actually do that. The telescope needs some renovations and modifications but it principle the answer is yes, and we are already running test observations. We hope that in the near future we can make things work.

EHT’s accomplishments in black hole detection have been lauded by many as worthy of a Nobel Prize. How do you feel about the scientific significance of these achievements? Also, can you tell us how you felt when the image was first captured?

Well, I have to say, what I felt was relief. It was not clear until the very last moment that it would work, because it is very complicated. So, I was very relieved when it worked in the way it should. The result was better than what most of us had anticipated.

As for the scientific significance, the interesting thing is that it depends on who you ask. Many physicists would say that the important significance is that since this is the first direct image of a black hole, it’s proof that black hole actually exists. If you ask astronomers, since we were always confident that the black hole is there, we were more interested in what black holes do to their environment. Now that we have the image, we can see more clearly how black holes interact with their environment.

You started teaching in Korean 9 years ago. We’re curious as to how you first came to teach at SNU, and your thoughts on SNU’s research environment.

The way I came here was pretty straightforward. I received my PhD in 2008 in Germany, then moved to an observatory in France for my Post Doc, and worked there for two years. After that, I had to explore some other opportunities, and while I was doing that, SNU Astronomy Department offered me a position for professorship. It was purely a professional decision; SNU is a good place to work, I happened to know some Korean radio astronomers who worked in Germany, so all in all, I thought it would be a good idea to come here.

As for the research environment, first of all I’m very happy with my colleagues and my students. They are very smart, and I am very impressed with the brainpower of the people here. But one thing I noticed is that at SNU, and maybe generally in Korea, there is very strong concentration on applied sciences like AI. SNU is doing very well already, but if there were stronger support for the basic sciences, I think SNU could become even stronger.

When did you first start dreaming about becoming an astronomer? How do you continue to stay motivated to research?

In my case, I think it all started in primary school. I remember that I was really interested in space, and I loved reading about it. And then I was very lucky – in middle and high school I met some great math and science teachers. And I realized that math and physics is related to how we understand the universe. I made the connection – math and physics together led to astronomy. So when I was about 16, I was rather certain that I wanted to pursue astronomy.

As for how I continue to stay motivated to research, well, astronomy is a fascinating topic. Every day I learn something new. Obviously, the universe is far from understood – I think this is my biggest motivation. There are so many unknown things about the universe, and I want to know a little bit more about it. I want to discover and understand new things.

You started working at SNU as a full professor this year. What are some of your most important values as a teacher?

I think the most important thing for a professor/teacher is to present the material you teach about in a way that people understand. That’s actually very difficult. It’s relatively easy to make people memorize things – I can write down equations and ask people to please remember them. But that’s not the point. Students don’t need to remember everything if I can make them understand the underlying concept. I try not to just write down an equation and tell people, “this is the equation”; I try to tell them where it comes from and why the equation looks the way it does.

How did you feel about having to conduct online classes this past semester? Were there any challenges you faced, or improvements you’d like to see made in the Fall?

I think I was lucky. My classes are usually theoretical; it’s relatively easy to make these classes online. We used the Zoom system, and I also made the recordings accessible to the students so they could actually follow classes even if they missed one. So in my case, the experience was quite straightforward.

Can you tell us a little bit about any plans for future research and your vision for the future?

My group and I are working on something called an active galaxy. We want to step by step understand what an active galactic nuclei is, and what happens when a black hole interacts with the galaxy it is located in. So this is our research vision for the next years, and I’m sure that there will be many interesting results.