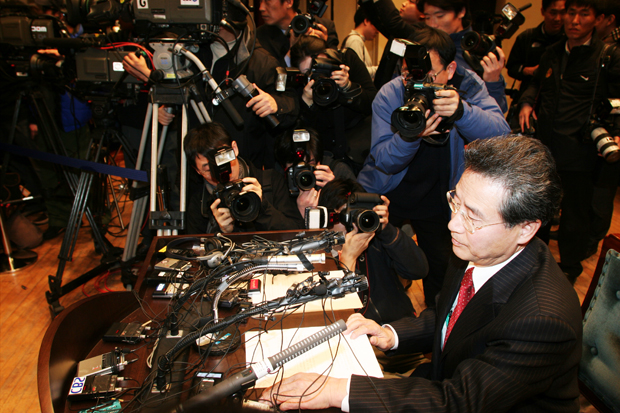 Jan. 6th, 2006
Chung Myeong Hee, Chairman of the SNU Investigation Committee
The Seoul National University Investigation Committee, initially organized to investigate the claims of scientific misconducts associated with the research article published in 2005 in the journal Science by Professor Woo Suk Hwang and co-workers (Hwang et al., 2005), expanded its scope of investigation to determine the facts and truth regarding another article in the same journal published in 2004, the cloned dog, Snuppy, the technical expertise of Professor Hwang's research team, and the process of obtaining human eggs.

Today we submit the final report based on our investigative effort from December 15th of 2005 to January 9th of 2006. Here is a brief summary of our report.

1. 2005 Science paper
(Hwang WS, Roh SI, Lee BC, Kang SK, Kwon DK, et al. 2005. Patient-specific embryonic stem cells derived from human SCNT blastocysts. Science 308: 1777-1783)
This article claimed that 11 human embryonic stem cell lines have been established through transfer of somatic cell nuclei. In interim reports we issued previously, we already reported that data from only two embryonic stem (ES) cell lines have been used for this publication and that even these two lines are not derived via somatic cell nuclear transfer (SCNT) but from in vitro fertilized (IVF) eggs. The stem cells that Professor Hwang claims to have created subsequent to the 2005 publication were also turned out to have originated from frozen fertilized eggs and not from cloned blastocysts. The data in 2005 article including test results from DNA fingerprinting, photographs of teratoma, embryoid bodies, MHC-HLA isotype matches and karyotyping have all been fabricated. The method and process of fabrication are described in the report. In conclusion, the research team of Professor Hwang does not possess patient-specific stem cell lines or any scientific bases for claiming having created one.

2. 2004 Science paper
(Hwang WS, Ryu YJ, Park JH, Park ES, Lee EG, et al. 2004. Evidence of a pluripotent human embryonic stem cell line derived from a cloned blastocyst. Science 303: 1669-1674)
The investigation on the 2004 Science paper in which the establishment of the first human ES cell line from cloned blastocyst was reported was initiated in response to various doubts raised on photographs of the cells and results from DNA fingerprinting analyses.

The committee has undertaken DNA fingerprinting analyses on the samples obtained from the ES cell line in question (NT-1), teratoma allegedly derived from NT-1, and the donor (donor A) of the egg and somatic cell. The DNA samples for the ES cell line included those from 20 subcultured NT-1 cell lines in culture or in frozen state from Professor Hwang's laboratory, one deposited to the Korean Cell Line Bank for the purpose of securing a patent, one maintained in Professor Shin Yong Moon's laboratory at SNU, and one maintained in the MizMedi Hospital. The 23 samples were examined by three independent test centers, and all three centers have obtained identical results.

NT-1 was shown to be distinct from all of IVF-ES cell lines MizMedi Hospital had produced. The committee has thus attempted to determine its origin by obtaining blood samples from two other individuals who donated their eggs and cumulus cells at about the same time and comparing the DNA fingerprinting patterns. One of the donors, the anonymous donor B, appeared to show a certain association with NT-1. That the donor B and NT-1 show an identical mitochondrial DNA fingerprinting pattern indicated that she is the donor of the egg. However, of the 48 nuclear polymorphic loci tested, 40 gave results that indicate the nuclear identity of NT-1 cells and donor B cells while eight gave results that point to the contrary. If NT-1 is derived from somatic cell nuclear transfer, all 48 polymorphism markers must be identical between the donor B cells and NT-1 cells. That eight are inconsistent implies that NT-1 is not an ES cell line derived from a cloned blastocyst. The eight markers were heterozygous in donor B blood but homozygous in NT-1. These data suggest that there is a high possibility that NT-1 resulted from the fusion of a non-enucleated egg and a nearby polar body, which initiated a parthenogenetic process.

The claim in 2004 article that the DNA fingerprinting pattern of NT-1 and that of the donor A match perfectly was a clear false report. Given that none of the alleged NT-1 derived cells or tissues match the donor A, the committee concluded that NT-1 ES cell line reported in Science in 2004 is not an ES cell line derived from a cloned blastocyst. In addition, claims that photographs of cells in 2004 Science article are those of MizMedi ES cells have also been confirmed to be true. Therefore, the committee concluded that results described in 2004 Science article including DNA fingerprinting analyses and photographs of cells have also been fabricated.

3. Verity of the cloned dog, Snuppy
We also carried out DNA fingerprinting analyses on the cloned dog Snuppy whose generation has been published in Nature in 2005 (Lee BC, Kim MK, Jang G, Oh HJ, Yuda F, et al. 2005. Dogs cloned from adult somatic cells. Nature 436: 641). We obtained somatic tissue from the egg donor, blood samples from Snuppy, from Tie, the dog that provided somatic cells, and from the surrogate mother and engaged three independent test centers for the analyses. Results from analyses of 27 markers that allow distinguishing amongst extremely-inbred animals and of mitochondrial DNA sequencing indicate that Snuppy is a somatic cell clone of Tie.

4. Propriety of procedure in acquiring and using human eggs
Information obtained from computer files and notes of Professor Hwang's laboratory members, from records of egg donation by four hospitals including the MizMedi Hospital, and from interviews with relevant personnel confirmed that from November of 2002 to November of 2005, a total of 2061 eggs from 129 females have been collected from four hospitals and provided to Professor Hwang's team. The exact accounting for the number of eggs used for each of Science articles is impossible as the initiation date for each project is uncertain and laboratory recording is not thorough. However, while the 2005 article claims to have used 185 eggs, laboratory notes indicated that at least 273 eggs have been used from September 17 of 2004 to February 7 of 2005.

Regarding the article in 2004, Professor Hwang claimed to have been unaware of the egg donation by the laboratory members. However, the graduate student who donated eggs informed the committee that the act of donation, while voluntary, was approved by Professor Hwang. Egg aspiration was carried out by Dr. Sung Il Roh on March 10 of 2003 at MizMedi Hospital, and notably, Professor Hwang accompanied the student to the hospital himself. In May of 2003, Professor Hwang's research team circulated a form asking consent for voluntary egg donation and collected signature from female technicians. This is based on information provided by eight current and former lab members.

5. The evaluation on the technical expertise of Professor Hwang's research team
The ES cells from somatic cell nuclear transfer are established through three main stages: the nuclear transfer, blastocyst formation, and establishment of the cell line. In order to be used for treatment of patients, cells from the established cell lines must be able to differentiate into desired cell types and to function in an effective manner in vivo and must be free of tumorigenic potential.

5-1. Nuclear transfer:
Professor Hwang's research team is one of the most active team internationally in performing nuclear transfer using eggs from animals such as pigs and cows. There are approximately 100 technical experts in this procedure in various veterinary institutions in Korea including those in Professor Hwang's laboratory. Thus, when it comes to animal cloning, with the added consideration for the successful cloning of a dog, Korea seems to be internationally competitive. The squeezing technique utilized in enucleation of human eggs is highly efficient in Hwang's team, but has long been used for the same purpose in animal eggs and thus cannot be considered unique or novel.

5-2. Cloned blastocyst formation:
According to Professor Hwang's record, a success rate of 10% is claimed for blastocyst formation following human nuclear transfers. However, a close examination of the data indicated that most of blastocysts are in poor condition. Some nevertheless appear to have successfully developed into blastocysts, implying that the team was in possession of technique of creating cloned human blastocyst.

Taken together, Professor Hwang's research team possesses neither the patient-specific ES cell line described in 2005 publication nor the NT-1 ES cell line, the forerunner cloned cell line described in 2004 publication. The data in 2004 publication are also fabricated as can be seen by the non-match between the donor A and NT-1. Such act is none other than deceiving the scientific community and the public at large. Even the scenario based on switching cell lines cannot explain the parthenogenetically derived cell line and cannot undo the fabrication of DNA fingerprinting data.

Not all the wrongdoing of all the individuals associated with fabricated publications can be revealed by this committee. However, that the publications are fabricated alone mandates a severe penalty by the academia. These individuals cannot be regarded to represent science in Korea. We have numerous well-qualified researchers whose works are globally recognized, and we also have a world-class research capability in biological sciences that will ensure a successful partaking in the field of stem cell biology. Our judgment is thus that the scandalous case of Woo Suk Hwang and cloned ES cells will not have a large impact on the effort of the scientific community in Korea. Rather, we are certain that this learning experience will be a stepping stone for better execution and management of scientific research and contribute to scientific advancement in this country. The young scientists who courageously pointed out the fallacy and precipitated the initiation of this investigation are our hope for the future. We would like to express our gratitude to those who supported the effort of this committee and provided critical assistance.