Terms such as “social responsibility” or “social contribution” are no longer revolutionary – nowadays, it is harder to find a context where these concepts are not brought up. Yet these terms are hard to define. What are the key concepts that make up “social contribution,” what does it require from us, and how far can we stretch the borders of its definition?

On September 6, SNU Social Responsibility (SNUSR) hosted an online lecture about appropriate technology, introducing the Nepal capacity building plan organized by the Korea International Cooperation Agency (KOICA). Professor Byung Gee Kim (School of Chemical and Biological Engineering), who gave the lecture, described the details of the visit to Nepal, and provided an analysis of the results of the project in relation to the socio-political background of Nepal. He then introduced various SNU projects related to social contribution, going on to suggest an interpretation and expansion of the term “social contribution” itself. 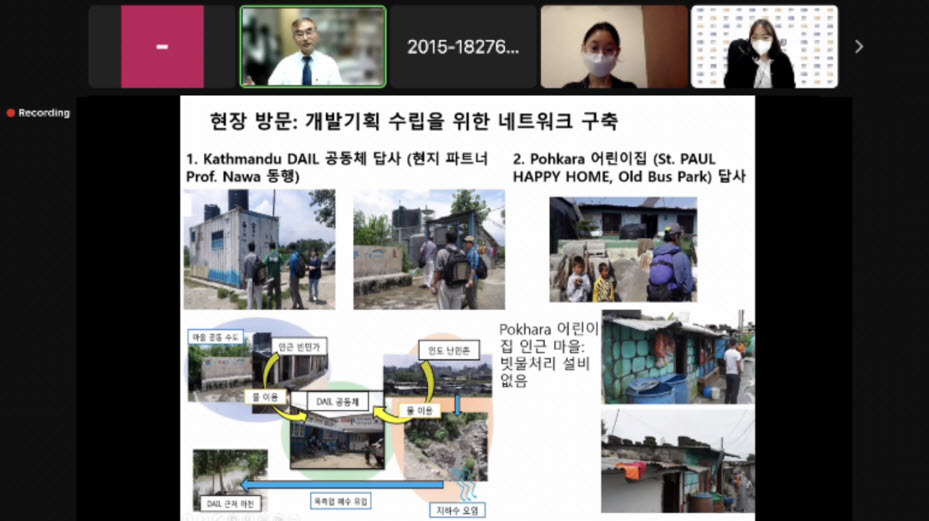 Professor Kim Lecturing About the Understanding of Social Responsibility

In order to establish a network for the development plan, the team made on-site visits to Nepal. Their stops included the Kathmandu branch of the Dail Community non-governmental organization and the kindergartens in Pokhara, which were suffering from contaminated water and lack of rainwater systems. For Dail Community, the team drew up plans to install pre-carbon filters and a simple filtration package with goals to improve the underground water quality. Drinking water tanks were set up at the kindergartens, as were simple filtration packages in the houses of residents.

Professor Kim then brought up a few lessons that were to be learned from their time in Nepal. To begin with, it was an opportunity for many to learn more about the history, society, and culture of Nepal. The project also allowed for the team to gain a more insightful understanding of the current state of Nepal’s universities, professors and students, as well as the state of various ODA projects. Most important, however, was learning how to walk in the shoes of the people you’re trying to help. “You can’t just go somewhere, thinking you’ll help, with a Korean perspective of looking at things,” he emphasized. “It’s important to think carefully about what the people you’re helping actually need, what they actually want.” He included a short overview of the history of Nepal, and a briefing of the political problems plaguing the country at the current moment. “I’ve never even thought about Korea as much as I’ve been thinking about Nepal,” he laughed.

Lastly, Professor Kim emphasized the significance of social contribution on individual levels, especially its importance to SNU students. “Social contribution and individual development are connected to each other in a cycle,” he said. “Personal success will bring you to a position in society where you can help others. Helping others comes back to you in the form of personal growth.” In this sense, according to Professor Kim, everything can be a form of social contribution, from going to volunteer in other countries to working hard in one’s studies. This, he underlined, is the type of leadership most needed from students today.