An Event of Relaxed Discussion Accompanied by Snacks and Boardgames

“Conversations with the Dean of Gwanak Residence Halls” was originally held twice every year to encourage communication between the student residents and the dean. The event had been halted due to COVID-19 until it returned after two years last May 11. “In a community of approximately 6,000 students of various backgrounds, continuous communication and understanding are necessary for a safe and happy residence life for everyone,” Dean Jae-Joon Song stated, emphasizing that this event also enhances communication between fellow student residents. The autonomous committee selected nine key agendas to discuss from the 68 topics that were collected through online surveys and offline bulletin boards. The suggestions that were not chosen, such as those regarding facility expansion and improvements, were also communicated separately to the Gwanak Residence Halls Management Team.

The first part of the event began with introductions from dean Jae-Joon Song and vice dean Dong-Hun Han. Students broke the ice by playing games together at their tables and conversing while enjoying the prepared food. Some foreign students even learned to play Korean traditional games such as Omok. In a quiz game where the dean and vice dean participated along with the students, the entertainment was amplified through questions about the backgrounds of the two administrators. “I enjoyed the programs in the first part of the event because they formed a joyful and comfortable atmosphere before we moved on to the discussions regarding the agenda,” said Park Danbi, a student who participated in the quiz game. 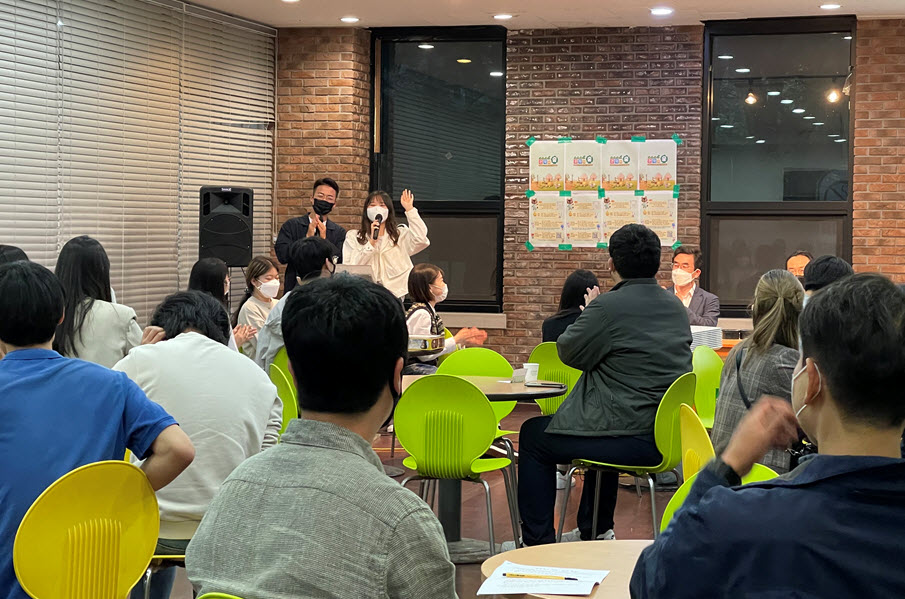 The Dean, Vice Dean, and Students Discussing the Agendas at “Conversations with the Dean of Gwanak Residence Halls”

Responding to the Needs of the Student Residents

In the second part of the event, the Residence Halls Management Team responded to the nine chosen agendas and answered questions that were asked. There were questions on the problem of queuing at the bus stops near the dormitories, confusion with laundry, prohibition of the purchase of beverages with high alcohol content on site, as well as other inconveniences that student residents experience. In response to these issues, dean Song promised to fix these problems through changing and improving dormitory facilities as well as contacting other organizations to help with situations that require assistance to resolve. Requests that could potentially threaten the health and safety of the residence halls students were rejected. The event also covered issues related to recent changes to the dormitory environment such as food prices, cafeteria service hours, and the operation of air conditioners. Students were particularly avid in their discussion of air-conditioning facilities. Kim Dain, a dormitory resident, asked whether effective measures, such as filter replacements, have been implemented to neutralize dust and soot remaining in the air conditioners after the dormitory fire in January. The facilities manager of the undergraduate residence halls responded that the air conditioners in Building 919 have been cleaned and that no problems have arisen when used. The manager further commented that additional cleaning will take place should a resident student request it. There was also a request for the residence halls to provide support for student-run environmental projects. Kim Minseo, a member of the residence halls autonomous committee, asked if the committee would be able to receive help for projects to improve the environment such as recycling campaigns. To this question, dean Song stated that the management team had also been concerned with issues such as the environment and cleaning staff labor protection and that it is willing to fund related projects.

“Conversations with the Dean of Gwanak Residence Halls” provided an opportunity for student residents to ask about the operation of the residence halls and resolve any doubts they held in a relaxed environment. “I felt reassured after directly asking and hearing responses from the dean about the unmanned delivery system, measures taken after the January dormitory fire, and residence halls safety,” Kim Dain said. The residence halls management team hopes to develop this event into a platform for mutual communication, where student residents can voice their concerns and management can share announcements. As COVID-19 measures are softened, the management team plans to hold academic and cultural events for dormitory residents. Gwanak Residence Halls hopes that student residents participate in the various events to create a more enjoyable dormitory environment for all.