On July 27 (Wednesday), Professor Huh was invited by the Department of Mathematical Sciences at Seoul National University to give a math lecture on his academic achievements. The lecture was held at the Sangsan Mathematical Science Building at Seoul National University, and the site was crowded with about 150 professors, students and reporters. The lecture was also broadcast live on YouTube, which was joined by hundreds of viewers. The lecture began with a congratulatory speech by President Se-Jung Oh. "Professor Huh, who has reached the world’s best achievements by challenging himself major in mathematics from the Department of Physics and Astronomy, will serve as a good example for students who are contemplating their aptitude and career path," President Oh said. Honorary Professor Myung-Hwan Kim (Department of Mathematical Sciences), who gave the second congratulatory speech, said, "Professor June Huh receiving the Fields Medal has given a great impression to the field of mathematics," adding, "I hope Professor Huh’s move will show the beauty of intellectual exploration." Professor Huh took the podium, said, "I feel special now that I came back to the Sangsan Mathematical Science Building, which I visited often as a student." In the lecture, Huh explained how to solve the combinatorial problem by utilizing the Hodge theory of algebraic geometry, which was the basis of his achievements. He proposed a single object X, and demonstrated the process of proving the problem of combinatorial theory by appropriately transforming the state of mathematical objects such as A, K, and P derived from X using the methodology of algebraic geometry. After Professor Huh's lecture, which lasted for about an hour, a Q&A session was held regarding the lecture. To a question asking whether mathematical proofs are applied to society or other fields, Professor Huh answered, "Methodology of algebraic geometry helps calculate complex amounts," referring to jungle gyms and algorithms that applied mathematical principles to demonstrate the applications of mathematical discoveries in other fields of study. 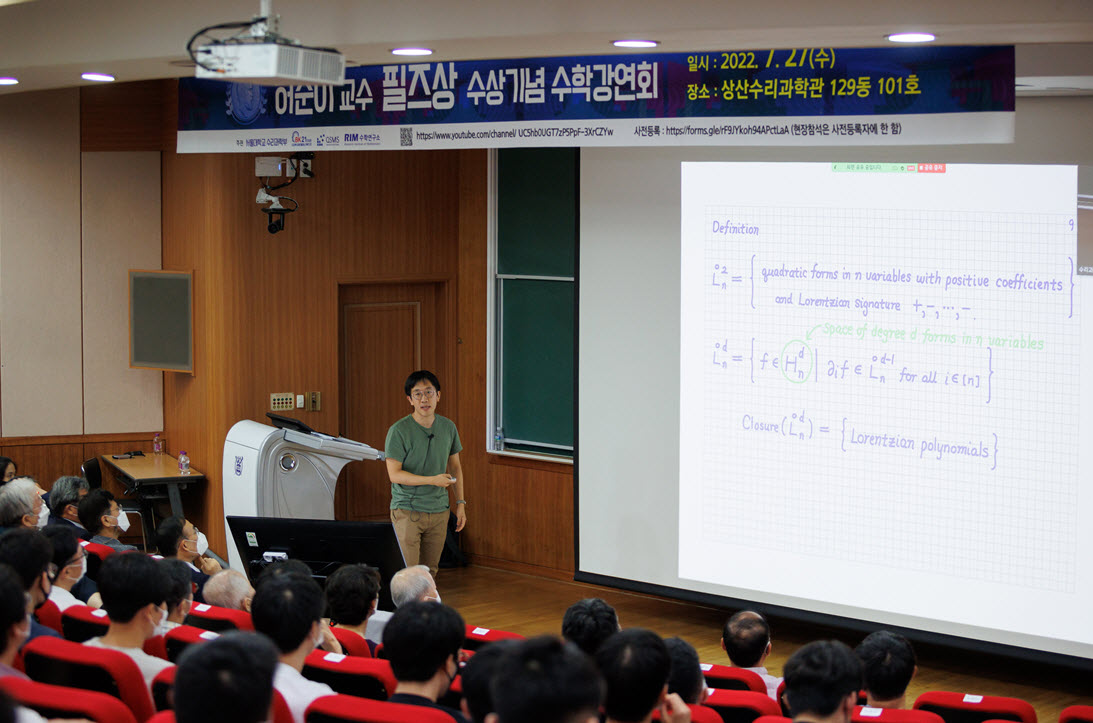 There was also advice from Professor Huh on students' career concerns. In the process of exploring various career paths, including poet and journalist, Professor Huh said, "There was no moment that I consciously decided to pursue math as a job," adding, "I continued my path as mathematician because I felt most comfortable when I was studying math." He then said, "Confidence that come from certain events, such as getting an A+ in your major or winning a competition can one day collapse," and added, "But the ungrounded confidence that I can do anything is good for having flexibility." It implies that ‘groundless’ confidence, which does not depend on logic can help moving forward and change your existing goals when faced with difficulties or unfamiliar situations.

When the moderator asked if there was anything he wanted to say to the students at his alma mater, Seoul National University, Professor Huh said, "There were ups and downs, but I think six to seven years in college was the most intense time in my life.", and advised to “Enjoy the time you spend in college.” 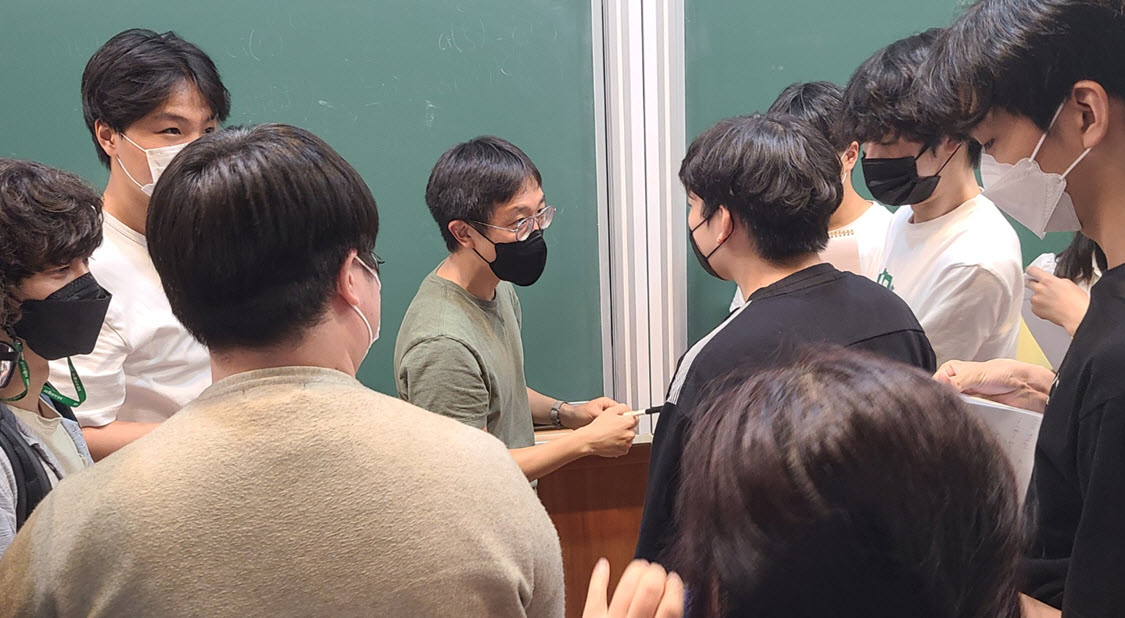 Professor Huh speaking to students after the lecture

After the Q&A session, there was a long line asking Professor June huh for autographs and pictures. Some students failed to apply for the lecture in advance and waited outside the lecture hall to come in and ask for autographs. Professor Huh stayed until the end and spent time giving words of blessing to the students. Min-Seo Choo (Department of Mathematical Sciences, 21), who attended the lecture, said, "I was interested in how algebraic geometry and combinatorial theory were connected, and I could roughly understand what was difficult when I was reading the papers.", and added "As the professor said, I won’t constantly doubt my talent and worry about my career, but rather think about whether math works well for me after I try hard." As such, this lecture was an opportunity to feel the pride and attitude of life of Professor June Huh, who was honored with the Fields Medal, towards his academic achievements.