On June 27, the College of Education hosted its fourth in a series of guest lectures, which participants could take part both offline (Building 12, Room 401) and via Zoom. Stephen M. Kosslyn, founder and former professor of Minerva University, presented his system of “active learning,” a form of learning where students can retain what they learn long-term, and use the information and skills they acquire to fulfill specific learning objectives. 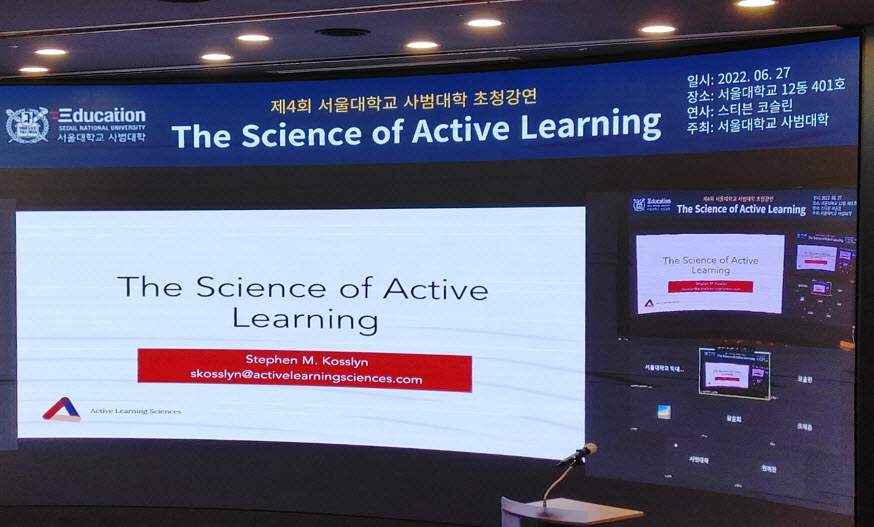 What is Active Learning?

Professor Kosslyn coined the term “active learning” to suggest a type of learning that differs from two conventional pedagogical methods: (1) traditional unilateral lectures that lead students to recall school material only in the short term, and (2) unstructured discussion classes that may lead to the problem of Quot homines, tot sententiae (Latin for “there are as many opinions as men.”). Professor Kosslyn stressed that all learning objectives need to be clearly defined and observable in order to be effective. For instance, teaching with a learning objective of “understanding DNA and RNA” in biology would not be enough. Instead, a better articulated learning objective would be “describing the chemical and structural characteristics of DNA and RNA.”

In the next part, Professor Kosslyn described techniques for making learning more active based on the attributes of the human brain and memory. According to the professor, active learning has five characteristics that enhance one’s memory: deep processing, deliberate practice, dual coding, chunking, and building associations.

Of these, dual coding refers to the presentation of a material through words and images at the same time. By this simultaneous “telling and showing,” psychologists say that people process the material more deeply compared to when they look at only the letters or just the pictures.

Professor Kosslyn illustrated the effectiveness of dual coding through a simple experiment. In the experiment, participants are shown word pairs, half of which are labeled “visualize” and the other half “say.” For the “visualize” pairs, the subjects are ordered to think of an image representing a random relationship between the two words. (e.g., for “chair-shoe,” participants can think of an image where a shoe is on the chair) For the “say” pairs, the subjects simply repeat saying the word pair to themselves three times. (e.g., for “window-clock,” participants say to themselves “window” and “clock” three times each) Afterwards, the list of pairs disappear and only one word in each pair is given. The participants are instructed to remember the other word of the pair.

The typical result is that the subjects recall more words from the “visualize” section than they do from the “say” section. Professor Kosslyn explained that looking at words and synchronously thinking of a visual relationship between them requires both word coding and image coding, leading to better recall, while simply repeating the words remains at the level of word coding. He thus stressed that textbook material needs to harmonize with pertinent images in order for students to better grasp the content.

In going through the five strategies for effective learning, the lecturer also explained how they can be applied to university education. Professor Kosslyn advised that in applying the strategies to actual classes, instructors must take note that comprehension is one thing and learning is another, meaning that understanding the course material does not mean that students have fully acquired it. He mentioned that even though students may be able to comprehend the content, peers and instructors should provide constant feedback in order for knowledge to be fully embodied in students.

Example of a Class Syllabus Adopting the Method of Active Learning

Deliberate Practice: The Importance of Feedback

The professor asserted that feedback plays a significant role as it offers the opportunity for “deliberate practice.” He said that before students try to learn something, they should be able to identify, through active feedback from others, which aspects of a given task are challenging for them. Deliberately focusing on these difficult aspects is what Professor Kosslyn means by the term “deliberate practice.”

For instance, when instructors teach the students about the characteristics of a good memo, they may encourage students to break into groups and write memos together. Students improve their learning through two steps. First, each group of students receives a model memo, compares it to theirs, and finds weaknesses in their own writings. Second, the groups revise each other’s memos according to a given rubric. Combining peer evaluation with self-evaluation allows learners to identify for themselves areas in which they can improve.

Professor Stephen Kosslyn’s lecture at SNU was informative for both faculty and students. Instructors were able to think about how to improve student achievement in their own classes. For students, the lecture provided valuable tips on how to retain knowledge more effectively. All who were able to join Professor Kosslyn’s fascinating lecture were able to gain a deeper insight into the true meaning of learning.