On April 28, the SNU Institute of Social Sciences held its first Classics Seminar, “Ten Discussion Topics on Plato’s Republic” in the International Conference Room of the College of Social Sciences. Enrollees took part in the session both online and offline, with 20 taking the class face-to-face and 61 via Zoom. Professor Park Sungwoo (Department of Political Science and International Relations), who specializes in classical political thought, led the lecture on the ten lessons of Plato’s Republic in the modern age. The final part was a discussion session.

The Fundamental Problems Found in Classics

Professor Park says that The Republic, written in 380 BCE, is an ancient text that still remains relevant today in its envisioning of an ideal community. He noted that although classics cannot directly solve the problems of contemporary society, we can find the common ground we share with the ancients in our pursuit of fundamental human values.

In the 21st century, where the hazards of post-truth are more evident than ever, the question of how we can determine truth becomes more significant than ever. The importance of this kind of inquiry derives from the fact that in the deluge of information today, we cannot be certain what truth is and whether absolute truth exists. Park highlighted Plato’s idea that truth cannot rule politics. Plato, who argued for the ideal of the philosopher-king, saw that philosophers as politicians who not only have a broad-based knowledge but also are active in their pursuit of truth. Park commented that even established universals do not necessarily help in determining action, so rather than having blind faith in absolutes, it is better to seek truth in making political decisions.

Afterwards, Park, referring to The Republic, addressed such questions as “what is an impartial society?”, “how hopeful is the future of the world?”, “is religion the savior or the destroyer of humanity?”, and “will technology rule humanity?”. Park explains that only humans can engage in philosophy in pursuit of knowledge, like Plato who sought wisdom through conversation and questioning.

In the discussion session that emulated the Socratic method, one student of the School of Earth and Environmental Sciences suggested that if technology develops to the extent where artificial intelligence (AI) becomes sentient, “an AI chatting robot that is programmed to love and pursue truth may take the role of the philosopher.” Park replied that even though it may be possible for an AI to develop more wisdom than ours, a truly “philosophical” AI that loves wisdom and truth itself is infeasible.

SNU Institute of Social Sciences: The Cradle of Convergent Research

The institute holds regular research methodology seminars led by domestic and international social science scholars, and monthly seminars by the new faculty of the College of Social Sciences. The institute at times hosts special seminars on timely issues. This semester, it held five seminars about the Russian war in Ukraine. 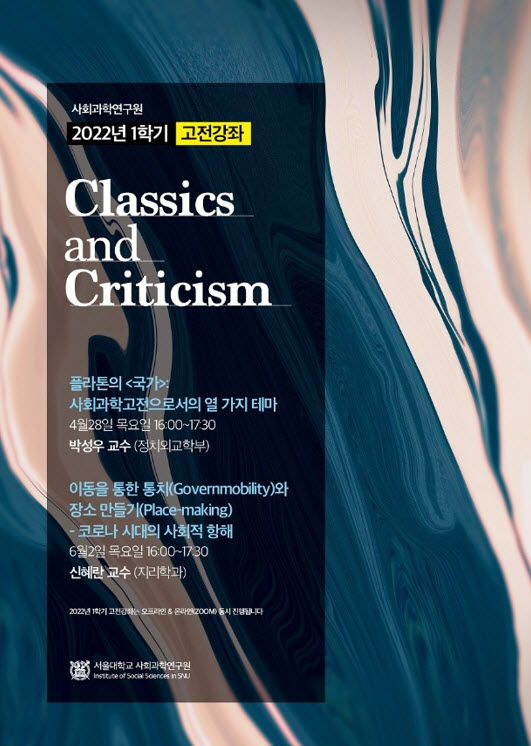 The Schedule of the Classics Seminar (2022 Spring Semester)

The Classics Seminar began this semester, in response to the demand of researchers and students on classics education. Professor Ahn To Kyung (Department of Political Science and International Relations), director of the Institute of Social Sciences, emphasizes the capacity for classics to provide opportunities to contemplate the fundamental questions of humanity. He hopes that this seminar will function as a place for the convergence of studies, in that classics address the widespread issues of society and do not place too much importance on any one specific discipline. This semester, the institute held two seminars, and as more than 80 people participated, it plans to schedule lectures more often with a higher seating capacity.