March 14 marked the beginning of a series of concerts hosted by the SNU College of Music’s Planning Committee. The first of seven concerts to be held in the Arts Center’s concert hall, the Planning Committee intended for each to be a showcase of classical music as well as a performance opportunity for students. These “Lunch Concerts” have taken place every other Monday at noon, with the final session scheduled for June 13.

Lunch Concert performers took care to select pieces that would help ease students back into their lives on campus, with many performers expressing their want to create a space for respite through music. The first concert saw the attendance of 120 audience members, and featured pieces by famous composers from the twentieth century. Kwon Hyejin, an undergraduate student in the Department of Agricultural Economics and Rural Development, remarked that the quality of the concert was “evidence of the musicians’ hard work and dedication,” and praised the beautiful execution of each concerto. Every successive concert was met with a similarly positive reception. 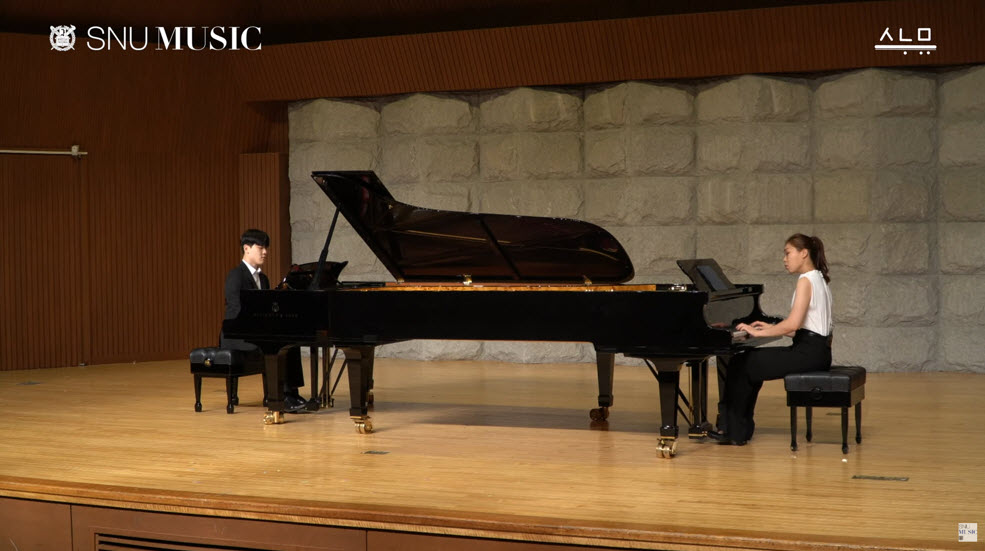 The recent concert, held on May 23, featured a talented ensemble of students and a captivating selection of compositions. Ryu Junhyun and Cho Wooyoung kicked off the concert with their performance of Sergei Prokofiev’s “Cinderella Suite.” Having teamed up for a class on piano duets, the pair had gone on to build a robust resume of showings, their most recent appearance being at the SNU Russian Evening Piano Concert. Ryu and Cho took to the stage with a version of the suite adapted for two pianos by Mikhail Vasilivich Pletnev. The pair ushered audience members through each act of the suite with their elegant yet fervent playing. When asked about preparing for the performance, the pair mentioned that they had been cautious not to get caught up in the technicalities of the piece. Instead, they sought to emphasize the sophistication and passion intrinsic to a ballet suite. The pair took liberties with the dynamics of the composition, playing certain parts more gently. They also manipulated the pace of the song even while staying within the indicated tempo. An entrancing procession of varying melodies, the performance was reminiscent of what one might have seen at Cinderella’s fabled ball.

The next performance was headed by Liberta Quartet, with Cho Wooyoung on the piano, Kim Wonyoung on the cello, Kim Jiin on the viola, and Goo Hyein on the violin. Having studied music together before college, the four friends banded under the concept of liberta, Italian for “freedom.” For the concert, the group played the fourth movement of Johannes Brahms’ “Piano Quartet No.1 in G-minor, Op.25.” Performed by Brahms himself at the piece’s Vienna debut, Liberta did its best to capture the lyricism of the composer’s original playthrough.

The concert came to a close with the performance of Pia Di Quattro. Cho Wooyoung and Jeong Chanyeon sat opposite Ryu Junhyun and Heo Seojin, both pairs poised to play their part for the two-piano performance. A rousing trilling of notes signaled the start of their first song: Franz Liszt’s “Hungarian Rhapsody No.2 For Two Pianos.” A Hungarian folk dance called a csárdás, this iconic piece is known for transitioning from its slower start, the lassan, to its fast and ornate friska. In navigating from the solemn to impassioned melodies of the song, the quartet engaged the audience with a wide range of harmonies. Finally, with all four members nestled on one seat, four pairs of hands were raised upon the keys for Albert Lavignac’s “Galop Marche For Piano 8 Hands”. The fast-paced song was a resonant end to the Lunch Concert, and a graceful demonstration of teamwork – the hallmark for all teams that had performed that day.

Students and staff are encouraged to attend the final Lunch Concert in June. Recordings of previous concerts can be found on the College of Music’s YouTube channel (https://www.youtube.com/c/SNUMUSIC).