After a two-year hiatus due to COVID-19, freshman orientations are back as in-person events. This year’s program was unique, in that it was mainly organized by a team of students that enrolled in 2020 or 2021, and began their SNU careers during a pandemic. It was an orientation planned by students who had never experienced an in-person college orientation themselves. 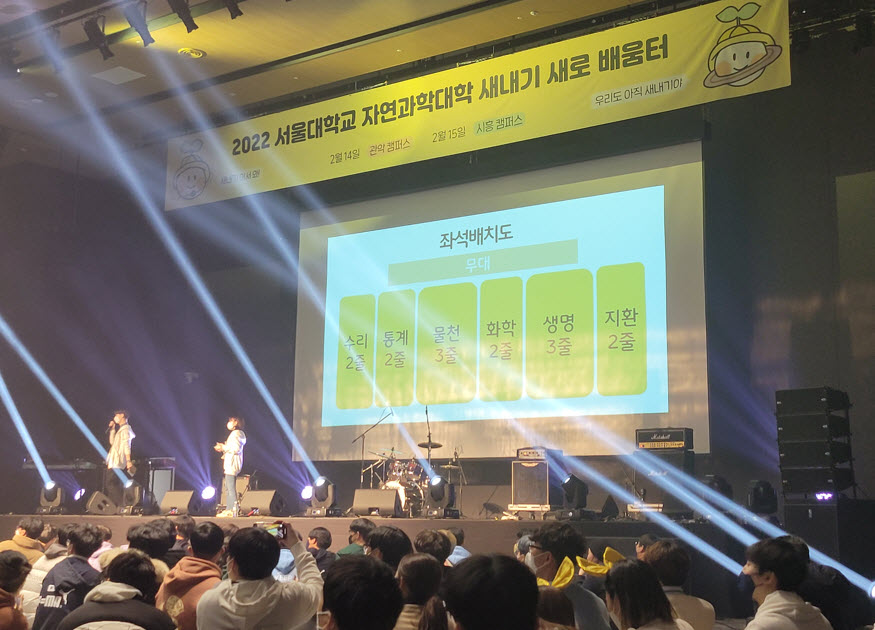 The Freshman Orientation of College of Natural Sciences

In February, each college hosted an orientation program for incoming students, one of the first rituals of becoming a college student. Some were one-day events, while others were held over multiple days. Students learn about graduation requirements, as well as getting tips and hearing stories about campus life from senior students. A few of the colleges introduced campus tours for the students. For the recreation programs, students were divided into groups for the various activities and games. Games such as “relay sketches” or “dance quizzes” aimed to build camaraderie among the participants. Other activities, such as taking pictures of famous locations on campus, or trivia quizzes about campus life, also sought to familiarize the students with the university.

Some colleges have unique traditions that have been passed down for years, such as the College of Humanities’ Eoulim Debate, where students form groups and discuss and debate various social issues. College of Liberal Studies hosted a Harry Potter-themed event, introducing games and activities such as one modeled after the Hogwarts’ sorting hat ceremony.

The pandemic posed challenges for every step of the planning process, especially in that most of the planning committees were composed of the so-called “COVID classes,” students who never had a chance to experience typical offline university events. Jongwon Jun, a student on the orientation planning committee for the College of Liberal Studies, emphasized how little time there was to prepare everything from scratch and rehearse. The planners made elaborate checklists and rehearsed the games and activities, preparing as much as time permitted. Planning an event of such large scale meant that unexpected situations were always around the corner. “We had to keep a very compact timeline and work responsibility to make things work,” Jun said. 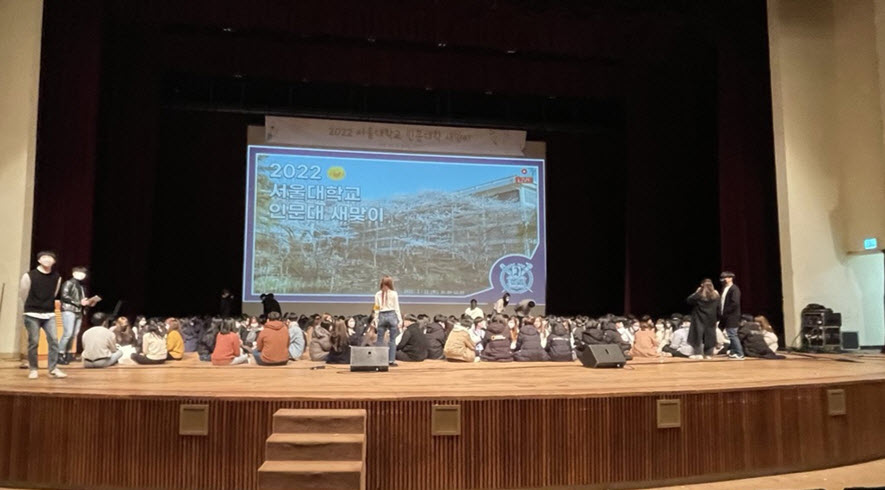 The Freshman Orientation of College of Humanities

Thankfully, each college was able to manage its orientation without any major mishaps, and first-year students seemed thrilled to have been able to participate in the first offline orientation in years. “I’m so glad that we were able to meet in person this year,” said Seoyeon Park, a first-year student in the Department of English Language and Literature. “We could see how much work our seniors put in, and thanks to them, we can start our time at SNU with high hopes.”

The senior students were just as affected. “As someone who entered college last year, there weren’t many occasions for me to go to campus,” said Wonseok Lee (Department of Physics and Astronomy), who participated on the performance team for the College of Natural Sciences orientation. “I got to see aspects of our college that I’d never known about before, and finally being able to perform in a band made me feel like a real university student.”

Students enter university bubbling with dreams and anticipation for the experience of “campus life,” with all its associations. Orientation allows junior and senior students alike to communicate and interact with each other, creating a bond of community within the colleges. It is also an important source of information about the university experience for students who are just embarking on a new phase of life. “The 2022 Orientation was not only for the freshmen, but for us seniors as well,” said Yunhang Nam (Department of Russian Language and Literature), head of the planning committee for the College of Humanities orientation. “It marks a new chapter in our college lives, and I hope it serves as a starting point for revitalizing our college and campus.”