On February 24th (Thu), the opening ceremony of Seoul National University Institute for Future Strategy was held at Room No. 107 of Wooseok Economics Hall (Bldg. No. 223) in Gwanak Campus. Institute for Future Strategy is a permanent organization under the headquarters, established by expanding and restructuring the characteristics of the previous National Policy Forum which was held every quarter, and its organizer, the National Strategy Commission. The main task of the institute is to seek the vision of the national and international society and propose policies by conducting convergent and complex research. 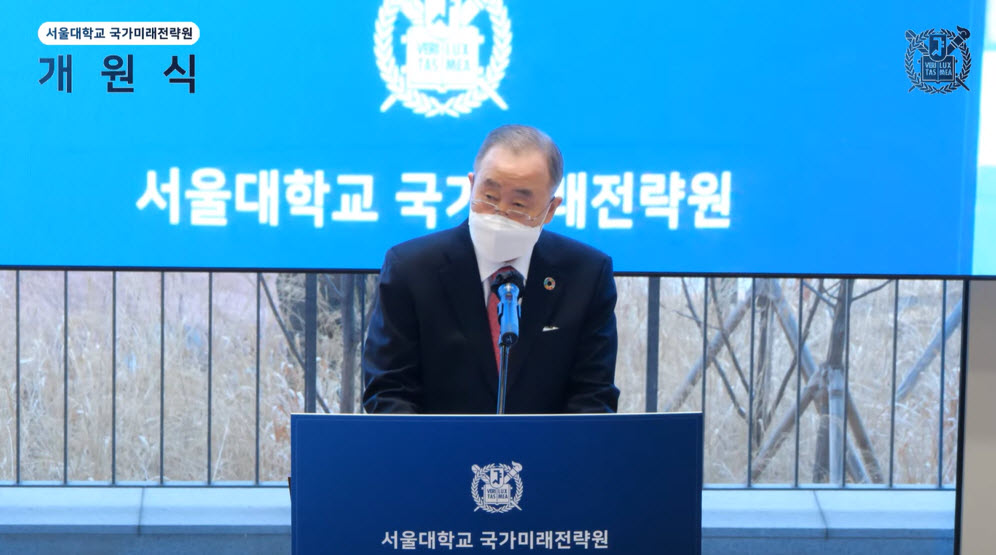 Ki-moon Ban, the honorary director of Institute of Future Strategy, is speaking.

Institute for Future Strategy is established to study major issues in the national and international society and to present policy directions using collective intelligence based on the academic assets of SNU. The first director of the institute, professor Byung-yeon Kim (Department of Economics), highlighted in an interview with a student reporter that, “convergence of various academic achievements across various fields is important to cope with complex problems occurring in Korea and the international community today, such as the U.S.-China hegemony competition, polarization, and division of the two Koreas”. He explained that, “SNU headquarters and faculty agreed on the need to study academically the major issues in modern society and propose policy directions, and from there began the discussions on the establishment of Institute for Future Strategy.” That is, SNU with its largest research environment in Korea and world-class researchers should fulfill its responsibilities by actively solving social problems. Moreover, among the faculty members existed the desire to contribute substantially and directly to solving community problems by aiding policy establishments with the academic achievements of the research unit to which they belonged.

This is not the first time Seoul National University has taken a move to contribute to the development of Korea and the international community by presenting a policy vision based on its various research results. Most of all, the National Policy Forum has been a venue to discuss major policy tasks and directions in our society since 2016, dealing with timely policy topics such as the impeachment, the Pyeongchang Olympics, and the COVID-19. At the 20th National Policy Forum, which was held most recently, presentations and discussions on local-based countries and local recovery strategies were held. In August 2019, the SNU National Strategy Commission was launched to function as a public think tank beyond the role of a public forum previously in charge of the National Policy Forum. The committee not only discovered agendas and hosted forums, but also expanded its scope of activities to provide policy alternatives to the government after conducting research with various research institutes in the school.

Institute of Future Strategy was created with the aim of expanding the National Strategy Committee, an extraordinary organization, to a more systematic and stable organization while inheriting the direction of the committee. At the request of the school's headquarters in the first half of last year, Hong-rim Ryu, former dean of the College of Social Sciences, and many professors began to think about flexible and interdisciplinary research organizations. Finally, after about a year of research, a plan to establish and operate the institute was prepared. Since then, Institute of Future Strategy opened in November last year as a permanent institution belonging to the university headquarters. Plans to communicate with members of society through lectures and discussions

Institute of Future Strategy is planning to deal with key national and international policy issues, focusing on research clusters that are flexibly organized according to research tasks. At this point ahead of its opening, there are five research clusters under the theme of ▲ The change in world order and the future of the Korean Peninsula ▲ Population issues such as low birth rate and aging ▲ The crisis of democracy ▲ Global pandemic ▲ The future of science and technology. As the main goal of Institute of Future Strategy is to share with society the achievements of various academic units, presentations, lectures, and discussions will be held regularly to inform the research contents of each cluster, and reports will be published every two to three years. Director Kim asked members of the school to pay attention to and actively participate in the institute’s activities and research projects. He delivered his wish to SNU students that, “as members of society and leaders of the future, I hope you join in sharing concerns about the future of the community.” He added that, “the capabilities of students familiar with the digital environment will be of great help to the institute in the future, in promoting the project.” Saying “now is the time to realize the potential of SNU on behalf of society,” he expected the school faculty to take the lead as a connecting link to inform social members of the research results.

The opening ceremony of Institute of Future Strategy was presided over by the assistant director Injoo Sohn and lasted for about an hour. With former UN Secretary-General Ki-moon Ban, who is playing the role of informing the public of research results as the honorary director, figures such as ▲ Se-jung Oh, SNU president ▲ Boo-kyum Kim, prime minister ▲ Hong-koo Lee, former prime minister ▲ Myung-ja Kim, former minister of the environment ▲ Ki-hak Sung, chairman&chief executive officer at Youngone Corp. were present. The opening ceremony was held in the order of greetings, welcoming speeches, and congratulatory speeches by invited people, followed by five faculty members leading each research cluster and director Byung-yeon Kim introducing the organization and operation plan of the cluster. Members of the school joined the opening ceremony in real-time through YouTube streaming.

Institute of Future Strategy is taking its first step in the fourth floor of Wooseok Economics Hall in Gwanak Campus, where its opening ceremony was held. After Institute of Future Strategy is settled as a stable research organization, an official website will be created that covers the activities of the National Policy Forum and the National Strategy Committee. We hope that members of the school will pay a lot of attention and provide support to the institute’s steps to diagnose the present and propose prescriptions for the future, when technology, politics, and culture in our society rapidly change day after day.