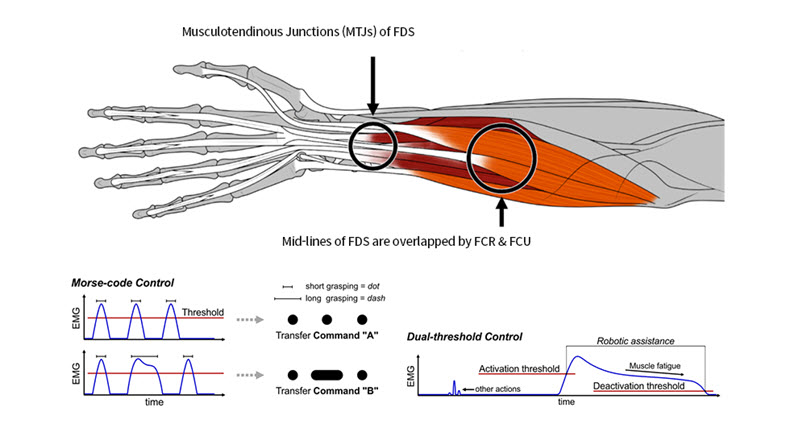 Professor Ahn Joo-eun and Professor Cho Gyu-jin developed a grip-enhancing robotic glove using a single sensor. They discovered that it is more stable and accurate to attach one EMG sensor near the wrist to grasp the user’s intention than the conventional method of attaching five sensors to five arm muscles. The practical use of wearable robots, which previously found it difficult to grasp the user’s stable intentions, and had limited practical use, has been accelerated a little further.

Although a lot of equipment is being developed to assist people's movement, not all prototypes have been mass-produced to help in real life. Even if there is an assistive effect, if a custom design for each user is required, production costs are high, and the number of consumers who can afford the increased cost is drastically reduced, and eventual mass production cannot be considered. In recent years, wearable robots that impart “intelligence” to assistive equipment to grasp the user's intentions and assist them at moments when they need help are receiving a lot of attention, but many sensors are needed to determine the wearer’s intention, and the location of the sensor is different for each person. Because of the different body sizes and shapes, it cannot be determined uniformly. For this reason, it is by no means a simple task to put a wearable robot to practical use that works effectively for a wide variety of people.

However, if the number of sensors for grasping the user's motion intention can be drastically reduced, for example, if only one sensor can be used to grasp the intention of the wearer's motion requiring assistance, the ease of manufacture and the possibility of mass production are significantly increased. To do this, first of all, “choice and concentration” is necessary. The first step to reducing the number of sensors required is to abandon the desire to assist with many movements and focus only on the motions that require assistance. The human muscle generates an electrical signal called an EMG, just before generating force, and the technology to grasp the motion intention using this signal is already used in the development of prosthetic limbs and other prosthetic devices, and its effectiveness has been further increased through recent machine learning. However, human muscles and movements do not form a one-to-one correspondence. Several muscles are used for one movement, and sometimes one muscle is used for several movements. In other words, no matter how much "selection and concentration" is used to help only one motion that needs assistance, it is necessary to reduce the number of sensors to one with the current approach.

In the fall of 2018, during the final exam project of the “Sports Engineering Lab” that students from the Department of Physical Education, Department of Mechanical Engineering, and Department of Textiles and Fashion Design took, some students discovered an interesting phenomenon that will greatly help with overcoming these difficulties. In the process of developing skills that enhance the grip strength required when students have to lift heavy objects or handle tools such as hammers, drills, and saws, they found that very large EMG signals are picked up through unexpected body parts only when trying to exert immense grip. In general, when trying to exert large force, a large EMG signal is generated from the muscle, so all existing studies have been conducted by attaching an EMG sensor to the skin just above the muscle. However, even though the grip strength is generated through the forearm muscles, a strong EMG signal was captured when the grip force was generated at the tendon-muscle junction located inside the wrist, which had little muscle. Surprisingly, the EMG signal in this part stayed at an insignificant level no matter how much force was applied to the forearm muscle when performing movements other than gripping an object.

Using this phenomenon, the students who completed the final exam project developed a robot glove that, together with the researchers of the Human-Centered Soft Robot Research Center, grasps the intention of the wearer to hold an object firmly with only one sensor, and immediately increases the grip strength. Through various experiments, the researchers revealed that the purpose of grasping the wearer’s intention by attaching only one EMG sensor near the wrist is more accurate than the conventional method of attaching five sensors to five arm muscles. In addition, by using the fact that the wearer’s intention can be grasped in a highly stable manner regardless of posture when this method is used, a control method was devised to transmit the EMG signal captured from the inside of the wrist to the robot using Morse code. By using this, in addition to the intuitive operation that assists the wearer only at the moment when the object is to be held firmly, various operations such as maintaining the enhanced grip strength without applying any force to the hand for an undetermined period are made possible.

Research is always a learning process. Through this study, we realized three important things. First, there are so many things we don't know about human movement yet, and the more we know about it, the better technology can be developed. In many cases, the bottleneck in the process of achieving the goal of enhancing physical function through engineering technology is the lack of knowledge about human movement rather than technology. Second, convergence is necessary. The convergence of expertise across several fields, such as kinematic experiments, machine learning, and soft robot production, made this research possible - research that has contributed to the practical use of future technologies. Finally, teaching and research are not separate areas. Classes give diverse students the opportunity to collaborate with peers from various backgrounds as well as the knowledge necessary for research, and both researchers and students always learn new things through research.