The review journal Seoul Review of Books (SRB) was started in Korea. SRB is not just a platform for book reviews. Like kindling that is burned first to make a fire easier to ignite, the editors who created SRB hoped that this book review would be a spark for intellectual dialogue in society. One book review sets a fire in someone's heart and turns a book into a living thing. Starting from this, more intellectual communities are formed, and these become the foundation of a society characterized by deep thinking. I met with the editors who created the SRB and asked why our society needed intellectual dialogue. 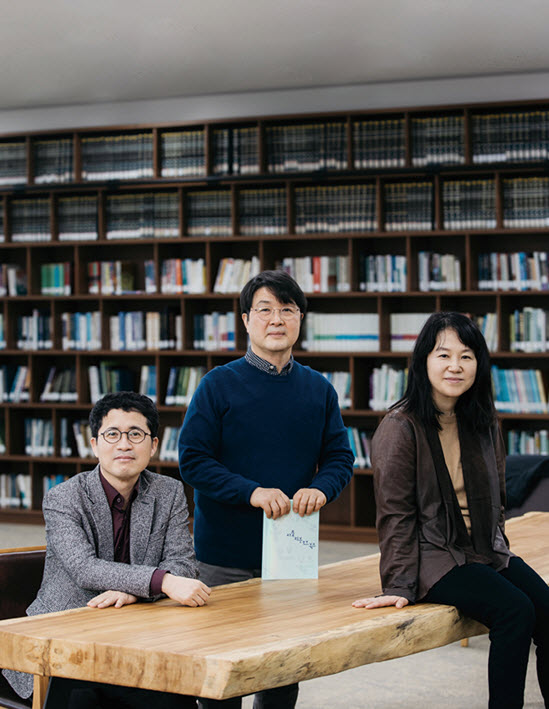 Hi. Congratulations on the publication of the first edition of the Seoul Review of Books (SRB) (Volume. 0). First, let me ask the professors who made the plan a reality for their thoughts on the project.

Sungook Hong: I was really happy. I was also scared because I think we have to even better in the future.

Yerin Kang: Actually, the most interesting thing was the novelty. It's so different from what I always do, but I think I should keep doing it because I pulled it off.

Hoon Park: I think the most appropriate answer is the amazing nature of the whole project. We really succeeded in pulling it off, and it was amazing.

I would like you to introduce the SRB in your own words. What kind of orientation and content characterizes the review?

Sungook Hong: SRB aims to be a professional book review. It's not just book reviews, however, but a magazine that discusses books in the end.

Yerin Kang: It would be nice to see SRB as a kind of map. It is said that there are about 50,000 books published a year. I think SRB is a map that introduces good books because it is hard to come across a good book by chance.

Hoon Park: When life feels boring and meaningless, people fall in love and travel. I think one of the ways to make life interesting is reading. Think of the SRB as a date with a book.

It appears that the New York Review of Books (NRB) and London Review of Books (LRB) provided the inspiration for the SRB. I wonder if there are any parts that you would like to posit as a strength that can only be found in the SRB.

Yerin Kang: I'm not sure what our strengths are relatively, but when I compare London and New York to Seoul, I think the base of the book culture is really different. The depth of the book culture is relatively shallow. Compared to those places, there are many more books published here. In terms of publications, there are so many books that Korea ranks seventh in the world, but the book culture has not been able to keep up. Through the SRB, I hope that we will have an opportunity to develop an attitude of doing various types of things related to books while asking questions about books and writing related articles.

We must mention the SRB's Tumble Buck story. It is said that the target amount was raised in 2 hours, and that the sponsorship received on just that day was 30 million won. It seems that there were quite a few readers who were interested in the idea, despite several publishers trying to dissuade you.

Hoon Park: I have been a researcher for a long time, so I didn't have many opportunities to interact with the market or the public, but seeing the SRB's Tumble Buck process in person, I received a lot of courage and encouragement. On the one hand, I also thought, ‘I really pulled it off.’ In fact, the response from readers was also the area that we were most concerned with. After seeing the Tumble Buck reaction, it became a turning point for the editors as we garnered the courage and positive tension needed to succeed.

Professor Sungook Hong, the editor-in-chief of the SRB, said that reading is "a private contemplation that is solitary and relaxing, as well as an activity of holding hands tightly to build a community." I would like to hear a little about that in more detail.

Sungook Hong: Reading a book is a very personal act. However, on the other hand, there is also a desire to talk about the books that I have read with others. The reason why book reading meetings are so popular these days is that you want to talk about books with other people, and you want to connect with them. When you stand still, reading is very much a solo activity, but in your mind, it is also an act of building a community. I hope the SRB can help create such a community.

It appears that the grand aim of SRB is, in the end, 'preparing an opportunity for intellectual dialogue'. What do you think is the biggest reason for the need for intelligent dialogue in society?

Hoon Park: Compared with the past, our society has made a leap forward in each field. In order for Korean society to gain greater respect and recognition from people all over the world, it will be important for not only the Korean Wave, but also for Korea to stand out in the field of sports, and economic growth. However, I think it is the intellectual depth of a society that ultimately gives rise to respect. In order for our society to progress a little further, there must be a foundation of such intellectual depth, which is currently very weak compared to other fields. Of course, this is the responsibility of people like us, so I think this will be a good opportunity for our society to grow and improve through the SRB.

I am also curious about the criteria for selecting and introducing book reviews by the editorial team at the SRB. What standards do you have?

Yerin Kang: No such standard has been established precisely. In terms of overall criteria, it seems like we're including the articles we want to read. In my view, the SRB feels like an ‘old library’. I think the early libraries functioned as places to write and create new books. I had to go to that library to read certain books. It's not that we're a library, but we still want our platform to feature the articles we want to read.

You published your first volume in December last year. I'm also curious about the reader's feedback on that volume. What reaction has been most memorable?

Hoon Park: In fact, just as in the case of all books, the reader's reaction is the most sensitive issue, so I have no choice but to be interested. So, as soon as Volume 0 was released, I shared all the reviews with the editors. There is a review that I remember, but it's because it's difficult to print. (Laughter) Fortunately, there were a lot of good reviews in the reviews that followed. Of course, there were positive reviews that only emphasized the good aspects of the publication, but there were a lot of reviews with a considerable intellectual depth, so we also developed and realized a lot from these reviews.

Sungook Hong: Because we are professors, we publish a lot of books, but we mainly deliver manuscripts to publishers. I have never created an entire book myself. I did not know the production process well, but learned it step-by-step and produced the SRB. The process of making a book was unfamiliar and difficult, but it was also a time of joy in terms of learning something new.

Yerin Kang: I am lucky to have been part of the process of creating the SRB. Because what I specialize is design and creation rather than research, the world of the books I read keeps getting narrower. While creating the SRB, I learned a lot by meeting and talking with faculty members from various majors. To me, it feels like a learning process rather than a collaboration.

Hoon Park: In general, there is a saying that when professors meet, they cannot cooperate because they only push their own individual opinions. However, I don't know how the editors of the SRB were recruited, but we remained while strengthening each of our viewpoints. (Laughter) We mainly communicate online, but I think that we have attracted great people both academically and personally as I watched the intense discussions quickly turn into a cooperative attitude.

Sungook Hong: It was helpful to spend a long time getting to know each other. We started gathering at the beginning of last year and discussed the direction of the publication for a long time, and in the process, we seem to have understood a lot. So even if opinions are divided, it does not lead to interpersonal confrontation.

You must be busy preparing for the next issue scheduled for publication in March. If you chose 'COVID-19' as your main keyword in Issue 0, what kind of story will you see in the next issue?

Sungook Hong: The most important issue we focused on in the first issue was safety'. Safety is very important and must be pursued in our society, but once we pursue safety, there are many restrictions. I think we can look into this dual nature of safety.

You said, “A good book review makes you want to read a book and turns it into a living creation.” I am curious about the plans of the SRB in the future.

Sungook Hong: Our simple plan is to publish it continuously for 10 years. I am hoping that publishing a review magazine containing good articles for a decade will bring about a small change in Korean society.

These days, as the time spent at home lengthens, it seems that this might be an ideal environment for reading books. If you have any comments you would like to share about books and book reviews, please share them with us.

Hoon Park: I think it's important to buy books. I also tell the students not to be greedy and try to read them all at once, but to place them on the shelf after reading the table of contents or the outline. To do that, you have to buy it first. (Laughter) Once it's on your shelf, while you're doing other intellectual work, or when something comes up during a conversation, you grab the book and read it. Then, you will be more interested in the book.

Yerin Kang: Originally, I liked book reviews, so I read them often. Whenever I read a book review, I always realize that reading a book review leads to a chain of wanting to read the actual book. This is the joy provided by book reviews. I hope that many people will discover this richness.

Sungook Hong: In the short article by writer Kim Hon-bi in Issue 0, there is also a quote that says, "Life changes because a book hits you right where it counts." Although the SRB may leave a strong impression on readers, it may not be enough to change their lives, but if it becomes a book review publication that allows them to experience a shift in their lives, I don't think there is anything more to be desired.