Professor Anna Yates-Lu admits that not even she herself could have expected that her pursuit of higher education would result in a faculty appointment in the Korean Music department at Seoul National University. Professor Yates-Lu was a political science major up until her encounter with pansori, a traditional form of Korean musical storytelling. She was captivated at once. “Pansori has the quality of being able to tell stories that anyone can relate to,” she remarks. This is how she came to be lured away from her political science ambitions and begin to study pansori under the tutelage of Haeseong Min, world renowned pansori artist. Today, she is an ethnomusicology professor at SNU, engaged in broadening the horizons of traditional Korean music.

The following is a translation of an interview with Professor Yates-Lu shortly after her appointment, discussing her research, her thoughts on traditional Korean music and its relevance to contemporary society, and more.

Some readers may not be familiar with the field of ethnomusicology. Could you tell us more about the field, and the sort of research that you conduct within it?

Ethnomusicology can be considered the study of the music of the people. Looking back on my own background, I’m not so much a musician that studies the music of the people as I am an anthropologist that studies people and their music. In other words, I study music through the lens of the people. This is why it’s important that I conduct field research. I believe direct observation and experience is particularly important in ethnomusicology, so when I attempt to gain a deeper understanding of an instrument or sound, I will often attempt to learn these instruments or the ways in which the sounds are produced firsthand.

How did you come to love traditional Korean music?

I was taking a traditional Asian music class to fulfill my graduation requirements. It was through that class that I was first introduced to pansori. We attended a pansori concert at the Korean Cultural Center in London, and it’s no exaggeration to say that that performance completely changed my life. It was captivating in ways that are difficult to describe. At first, I watched these performances with subtitles but soon, I had no need for them. Even though I didn’t understand any Korean at the time, through the delicate nuances in the performers’ sounds and movements I felt I could not only understand, but relate personally to the stories being told. It was a cultural experience that transcended language.

Pansori taught me the importance of experiencing music in person. A lot of people say that pansori is boring, but I believe that may be because they have not had the pleasure of experiencing pansori in person. Recordings do no justice to pansori. I had been pursuing a master’s in political science when I took this class, but in no time at all, I found myself writing a PhD dissertation on pansori (laughs).

Not only did you write your PhD dissertation on pansori, but you also participated in the K-VOX Festival, Europe’s representative pansori competition. Can you explain the motivations behind your participation?

I studied the storytelling aspect of pansori in England for one year and I learned pansori in Korea for another year. Even before going to Korea, I was aware of the K-VOX Festival, which was hosted by a Korean couple residing in France who had together translated several prominent pansori works. I had always wanted to participate, and serendipitously, my pansori teacher in Korea had a yearly workshop in France, through which I was able to make my dream a reality.

You received first prize in a competition that you attended by chance. Although some time has passed since your achievement, can you tell us how you felt at the time?

I was first and foremost fortunate. Many of the participants were those who had participated in my teacher’s yearly workshops and so had practiced pansori without the guidance that I had. I didn’t feel so much pride in winning as much as I felt a profound happiness and respect to be surrounded by others who were passionate about pansori.

The hosts of the K-VOX Festival have done an immense job in fostering a pansori community in Europe. If you attend a pansori concert in France, you will find the enthusiasm and applause to be much greater than a pansori concert in Seoul. It is quite amazing that a subset of French people has come to enjoy the acquired taste that pansori has to offer.

You were invited to perform in Korea after the K-VOX Festival. How was this second trip to Korea?

I was invited to perform in Gwanju, where I was also able to greatly deepen my understanding of pansori. While I felt that I wanted to continue to stay in Korea and learn more about it, I was a student with a budget, and so at that time the experience could not culminate into something greater.

You became the youngest faculty to be hired in the Department of Korean Music last September. What have been your impressions of SNU, and of the College of Music?

It’s a wonderful opportunity. There’s a great environment here with an abundance of concerts and people enthusiastic about research. My peers are always of great support, and so my impression of SNU so far has been great. Also, I used to live near the mountains when I lived in Germany, and so it almost feels like I’m back home whenever I look outside my window.

How do you feel about how the coronavirus has affected classes?

It’s a shame because I feel there are so many opportunities that are lost when classes are conducted online. Even through online classes, I’ve come to feel that students here are very hardworking. Although my classes are conducted in English, students actively partake in discussions and ask questions frequently.

How do you find conducting classes as a newly appointed faculty member?

I try to facilitate discussion as much as possible, and because my classes span up to three hours, I try to put videos into the mix whenever I can. In my Music of the World classes, I try to incorporate documentaries on the culture and people pertinent to the music that I introduce, and give assignments in which students reflect on how their impression of the music changed after watching these documentaries. Reading my students’ reports and seeing them gain a deeper appreciation for the music is a lot of fun.

What do you look most forward to as a professor at SNU?

I feel that even in the College of Music, there are not many people familiar with ethnomusicology. I would like students to learn and research in new and creative ways so that they’re able to come up with fresh ideas about the music they’re interested in. For myself, I really look forward to being able to learn much more about Korean music at SNU. Through the many experiences I anticipate having, I want to be able to produce a variety of creative works.

You wrote a paper at the School of Oriental and African Studies (SOAS) of the University of London discussing the convergence of tradition and creativity in contemporary society. What niche do you believe traditional music occupies in Korean society today?

What are your opinions on LEENALCHI, the alternative Korean band that infuses elements of traditional music, and have recently collaborated with the Korean Tourism Organization to produce music videos, some of which currently have over 300 million views?

They are a testament to the diversity of Korean music, and to the importance of traditional music as well. I think it’s always great to improvise and experiment with creating new forms of music like LEENALCHI have done, even if every experiment may not be successful. 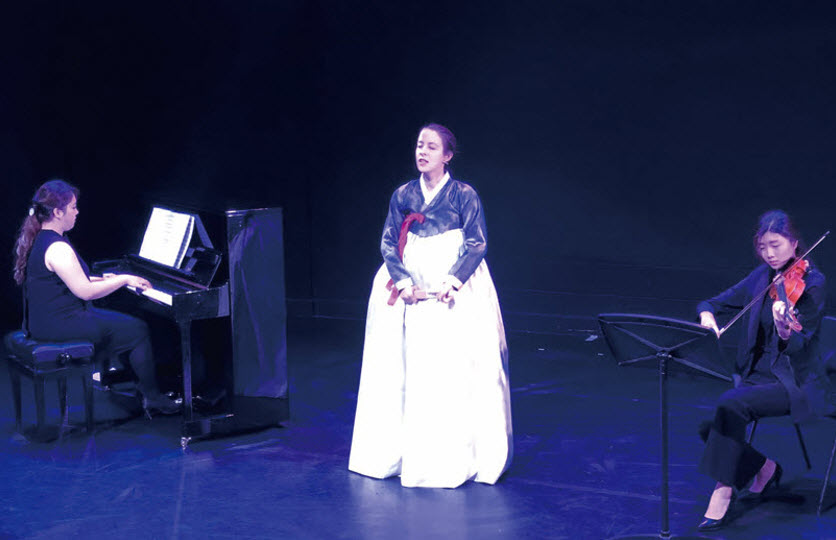 Do you believe there are significant differences in the way traditional Korean music is perceived overseas and in Korea?

I get the feeling that Korea is not as confident in sharing its traditional music with the rest of the world as compared to K-pop, which shouldn’t be the case. Pansori is now often performed in abridged versions embellished with elements of K-pop or dance, making it impossible for those outside of Korea to fully understand what pansori is, and appreciate its real charm. I understand the importance of catering towards one’s intended audience, but I’d like to emphasize that there is an audience for authentic pansori. Just look at France. I believe that pansori will have a strong appeal amongst those who are seeking a truly enriching cultural experience.

What’s your vision for your future as an academic? 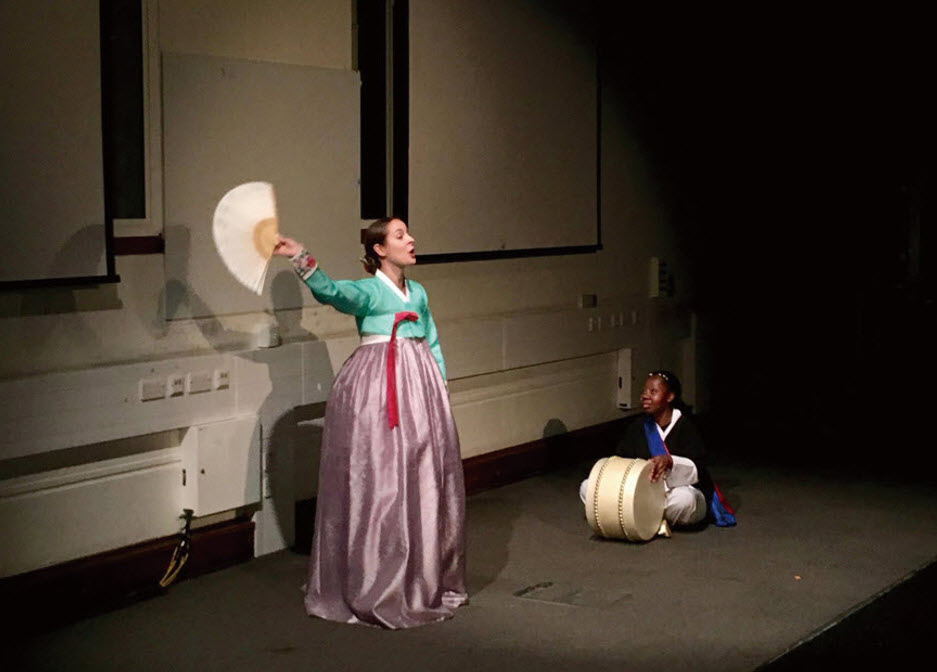 Professor Yates-Lu performing at the University of London (2016)