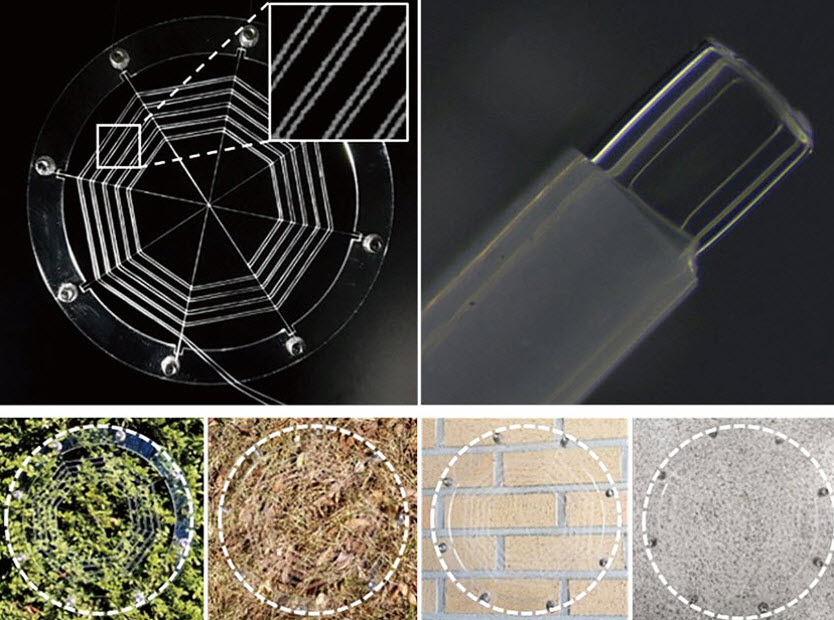 A close up view of ionic spiderwebs demonstrating their ability to camouflage themselves in a variety of environments including a forest, fallen leaves, a brick wall, and the floor of a building , courtesy of the Multi-Functional Soft Materials Lab

A new kind of robot has been born in Professor Jeong-Yun Sun’s lab, one that takes inspiration from the way spiders spin their webs. Spiders construct webs based on a minimalist framework, which allows them to sense even the slightest vibrations produced when their prey become entangled and also allows them to clean their webs of dust and debris by slingshotting contaminants away. Professor Jeong-Yun Sun and his research team have taken the architectural expertise presented by spiders and applied it to spinning their own artificial spiderwebs which are capable of sensing, adhesion, and self-cleaning through electrostatic actuation and dirt-shirking coating.

These ionic spiderwebs are part of the soft robot revolution. Soft robots are made of compliant materials and have superior flexibility and therefore better ability to carry out unpredictable or irregular tasks compared to conventional robots. Broader use of soft robots was heretofore limited by the inability to harmoniously integrate the various elements of a soft robot into a single unit but through biomimicry, specifically by mimicking the spider and its spiderweb, this problem may finally have been solved. Spiderwebs are both the spider’s shelter and its bait, and thus must possess seemingly opposing abilities: the ability to maintain their own structural integrity and the ability to destroy prey. Spiders spin a minimalist web that’s able to detect the slightest perturbations once its prey has made contact with the silk, thereby minimizing the damage caused by the entanglement. Once its prey is within reach, the spider covers it with fresh silk to ensure its demise. Damage to the web also occurs after bad weather or simply due to the accumulation of dust and debris. To keep its web squeaky clean, the spider slingshots contaminants off by delicately plucking its strings, just like a harpist would.

Professor Jeong-Yun Sun and his students, YoungHoon Lee, and Won-Jun Song devised a soft robot based on this model of elegant efficiency. Their creation, termed ionic spiderwebs (ISW) consists of an ionically conductive organogel core encapsulated in elastic and durable silicone rubber. A high voltage of electricity produces an electric field that polarizes surrounding objects. In essence, it creates a phenomenon known as electrostatic adhesion, which is able to capture a wide variety of objects, ranging from metals and polymers to organic materials. Furthermore, the elastic nature of the ISW allows it to stretch to three times its resting length, which results in the ability to capture targets with a 68-fold greater mass.

ISWs also have the ability to sense when a target is within range, thereby allowing them to initiate their electrostatic adhesion abilities only when necessary. This is particularly important as electrostatic adhesion capture is a not a completely clean procedure, and can cause contamination. By minimizing the “on time” of the ISWs, power consumption, and contamination of the machines is kept to a minimum, which ultimately results in a 32.5 times greater adhesion force long-term compared to machines without this sensing ability.

Finally, ISWs are able to clean contamination by electrostatic vibration, similar to the vibrations generated by a spider as it slingshots contaminants away. Instead of a spider to generate a slingshot action, electricity is used to produce alternating attraction and release between the strings, which at a particular frequency causes the strings to vibrate. A robot unit also inevitably accumulates dust, which can interfere with its ability to perform. Electrostatic vibration cleaning allows ISWs to retain their functional properties up to 98.7% which is critical to their applicability in the real world.

Ionic spiderwebs provide a vital framework for further translation of soft robots into the real world. The technologies and techniques demonstrated in this research can be applied to numerous fields, from the creation of artificial muscles to electronic skin. To create robots more capable of carrying human tasks, researchers may find inspiration not from an intricate web of complexities but from a simple spiderweb found in nature.