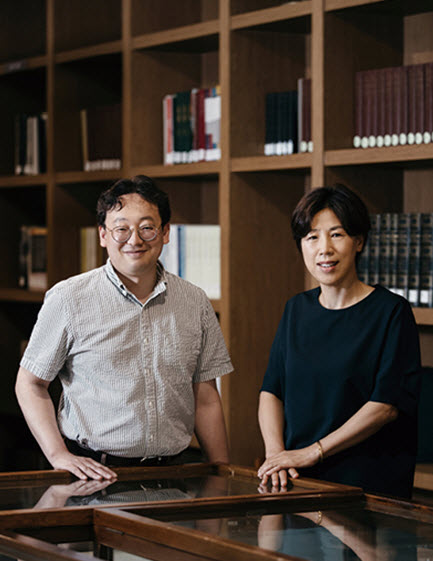 SNU tragically suffered the loss of six of its students during the April 19th Revolution. One of these students was An Seung Joon, who at the time of his death was a third-year economics student. In honor his life, the student council of the College of Commerce and Economics collected memorial donations to fund the installation of an ‘An Seung Joon Collection’ of books in their library. In preparing for this year’s exhibition, the ‘An Seung Joon Collection’, which had since been scattered, was recovered and displayed in its entirety.

“I wrote The 70-Year History of SNU Library with Mr. Song to commemorate the library’s 70th anniversary. I’d come across The 50-Year History of SNU Library in my reading and was very moved. I could see the effort that past SNU students had put into protecting the library’s books during the Korean War.” (Min Se Young) As war ravaged the country, SNU Library had no time to move its most precious works. It was all then-Minister of Education Professor Baek Nak Joon could do to procure eight trucks and send five of them to the SNU Library and three to the National Library. It was through this effort that works like Journal of the Royal Secretariat and The Veritable Records of the Joseon Dynasty managed to be protected from North Korean soldiers.

Last April, the ancient document De ratione communi omnium linguarum et literarum commentarius was returned to the SNU Library after 70 years. It had been removed by a UN peacekeeper, an English soldier using the library as a hideaway, who had taken the book as a reminder of the horrors of war. This soldier eventually gave the book to an English writer by the name of Alan Garner, who, in turn, relayed the book to SNU Department of Linguistics Professor Kim Joo Won. Based on testimony from Alan Garner, a part of SNU Library’s collection of books was burnt in the Korean War.

What does the SNU Library look like in 2020, after having survived such an eventful past? “I’ve noticed that SNU students tend to dig deeply into a single topic, studying it from various angles. Books can be pretty heavy, but I’ve seen a lot of students carrying them by the armful.” (Min Se Young) Due to the meticulousness of their readers, many of the books returned to the library are brimming with post-its – so much so that an entire day has to be put aside for their removal. “It can be a tedious job, but more importantly, we’ve had some books rip as we try to remove post-its from their pages. Even if we do manage to get them off the page, there’s nothing we can do about the dust that adheres to the sticky residue. We’d much rather students used bookmarks.” (Song Ji Hyeong)

SNU students also tend to look for resources alone, without any help from the library staff. “I’ve observed that most students have a strong inclination to want to solve problems on their own.” (Song Ji Hyeong) But one of the great pleasures of working at a library is helping a reader find the material they’re looking for. “A medical professor once requested some supplementary readings on the ignition points of five different medicines. We couldn’t find any resources on the databases that SNU was subscribed to, so we sent an inquiry to a company dealing with all the national chemistry databases – but they couldn’t come up with anything either. We didn’t give up, however, and managed to get a response from the US Library of Congress. I still can’t forget the professor’s joy when we told him the news. Since then, he’s continued to put in several requests for various materials.” (Min Se Young) “When we get to see the end results of a research project we’ve helped find readings for, we feel extremely gratified.” (Song Ji Hyeong)

To the librarians of SNU Library, SNU students and faculty look pretty much the same today as they did 70 years ago: day and night engaged in poring over endless loads of books to study. The SNU Library continues to quietly support these tireless scholars, knowing that some of the light from their research will shine out from behind the library’s venerable walls and illuminate the world at large.