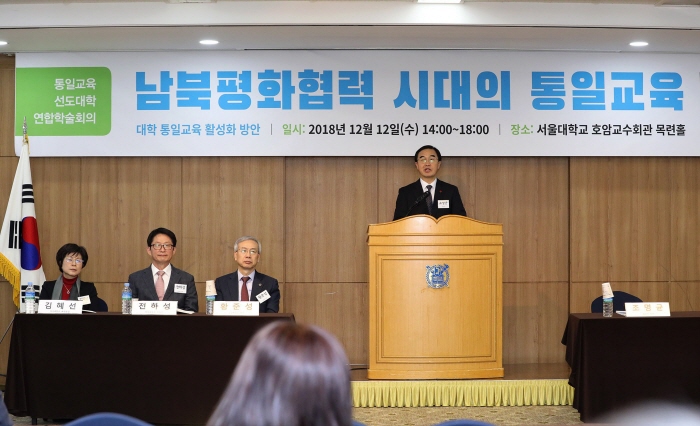 Minister of Unification Cho Myoung-gyon is giving a congratulatory speech at the conference.

On December 12, SNU hosted an academic conference at the Hoam Faculty House to celebrate current progress as well as discuss future ideas on unification education. The theme of the conference was “Unification Education in the Era of Inter-Korean Peaceful Cooperation.”

Along with Acting President Park Chan-work and Korea’s Minister of Unification Cho Myong-Gyon, the presidents of the other universities as well as affiliates of the programs were present at the conference.

SNU’s Unification Education project is supported by the SNU Institute for Unification and Peace Studies (IPUS), which was established in 2006. The organization recognizes unification an important issue for not only Korea but also the world at large and hopes to “create an effective research environment for Unification Studies by building connections with relevant research centers both within Korea and abroad.” Previous projects include the Unification Perception Survey (since 2007) and the Unification Research Series (since 2013).

At the conference, Acting President Park Chan-wook emphasized the importance of educating students on unification. “It is very important that we break away from the ideals of division and confrontation brought on by the Cold War and teach university students the values of seeking harmony and co-prosperity.” He also announced that SNU plans to establish a graduate school for peace and unification at the SNU Siheung Campus.

Unification Minister Cho Myoung-Gyon also gave several addresses. “During a time when inter-Korean relations and the political landscape are undergoing many changes, unification education is also transitioning from the existing education on national security to education on peace.” He expressed his hopes that the selected universities will play a central role in promoting this education at such a pivotal time in the nation’s history.