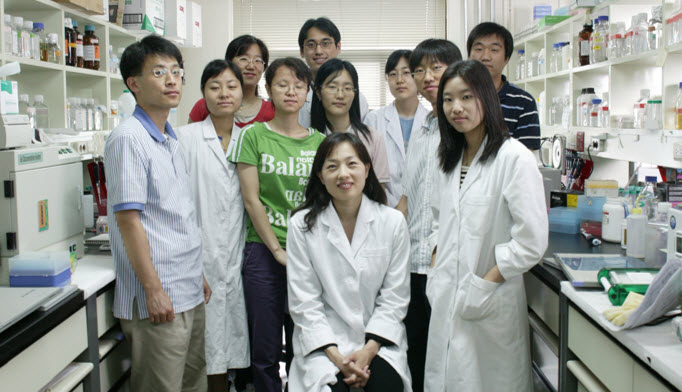 In 2010, Professor Hong Sungook of the Department of Biological Sciences at SNU published a paper on leadership and its effects on the creativity levels of a lab in the Journal of Science and Technology Studies. By observing the communication, behavioral patterns, and conflict management among the 18 members in the lab of Professor Kim V. Narry of the Department of Biological Sciences, Professor Hong concluded that the way a lab is run does indeed have a direct correlation with its creative output.

Professor Kim received her B.A. in Microbiology at SNU in 1992 and her M.S in Microbiology in 1994. She then pursued her Ph.D. in Biochemistry at Oxford University and joined SNU as a member of the teaching faculty in 2001. Professor Kim is best known for her outstanding research in RNA, and in particular in microRNA, which plays a role in various aspects of cellular function and developmental control.

What sets Professor Kim’s lab apart from many others is its horizontal communication structure, in which members of all positions have a say in the direction of the lab’s research. This reciprocal respect between members creates a more relaxed and open atmosphere as compared to the hierarchical structure of other labs in which employees are treated differently according to their rank.

In Professor Kim’s lab, active participation is the sole factor in determining whose name goes on a paper, a decision that commonly causes conflict in other labs. In addition, all members must agree upon who is credited on published research papers.

Professor Kim establishes effective horizontal communication among her researchers and sets clear standards so as to avoid conflict. She also insists upon the honest use of resources to ensure high moral standards in the lab. According to Professor Hong, these factors lead to a creative research environment that produces high-quality results.