In a new study published in Nature, researchers have determined the genetic origins of Asia’s most enigmatic mummies. Once thought to be Indo-European speaking migrants from the West, the Bronze Age Tarim Basin mummies are revealed to be local indigenous population with deep Asian roots and taste for far-flung cuisine. 
As part of the Silk Road and located at the geographical intersection of Eastern and Western cultures, the Xinjiang Uyghur Autonomous Region has long served as a major crossroads for trans-Eurasian exchanges of people, cultures, agriculture, and languages. Since the late 1990s, the discovery of hundreds of naturally mummified human remains dating to ca. 2000 BCE to 200 CE in the region’s Tarim Basin has attracted international attention due to their so-called ‘Western’ physical appearance, their felted and woven woolen clothing, and their agropastoral economy that included cattle, sheep/goat, wheat, barley, millet, and even kefir cheese. Buried in boat coffins in an otherwise barren desert, the Tarim Basin mummies have long puzzled scientists and inspired numerous theories as to their enigmatic origins. 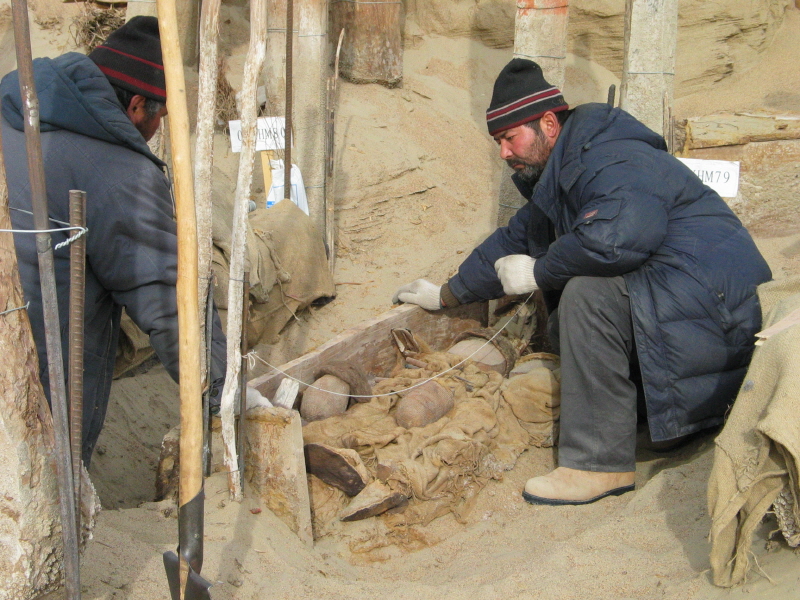 
The Tarim Basin mummies’ cattle-focused economy and unusual physical appearance had led some scholars to speculate that they were the descendants of migrating Yamnaya herders, a highly mobile Bronze Age society from the steppes of the Black Sea region of southern Russia. Others have placed their origins among the Central Asian desert oasis cultures of the Bactria-Margiana Archaeological Complex (BMAC), a group with strong genetic ties to early farmers on the Iranian Plateau. Controversially, they are also frequently credited with spreading the early branching Indo-European language, Proto-Tocharian, into East Asia.


To better understand the origin of the Tarim Basin mummies’ founding population, who first settled the region at sites such as Xiaohe and Gumugou ca. 2000 BCE, a team of international researchers from Jilin University, the Institute of Vertebrate Paleontology and Paleoanthropology, the Max Planck Institute for Evolutionary Anthropology (MPI-EVA), Seoul National University of Korea, and Harvard University generated and analyzed genome-wide data from thirteen of the earliest known Tarim Basin mummies, dating to ca. 2100-1700 BCE, together with 5 individuals dating to ca. 3000-2800 BCE in the neighboring Dzungarian Basin. This is the first genomic-scale study of prehistoric populations in the Xinjiang Uyghur Autonomous Region, and it includes the earliest yet discovered human remains from the region. Typical Xiaohe boat coffin with oar. The coffin is covered with a cattle hide.
© Wenying Li, Xinjiang Institute of Cultural Relics and Archaeology.


To their great surprise, the researchers found that the Tarim Basin mummies were not newcomers to the region at all, but rather appear to be direct descendants of a once widespread Pleistocene population that had largely disappeared by the end of the last Ice Age. This population, known as the Ancient North Eurasians (ANE), survives only fractionally in the genomes of present-day populations, with Indigenous populations in Siberia and the Americas having the highest known proportions, at ~40%. In contrast to populations today, the Tarim Basin mummies show no evidence of admixture with any other Holocene groups, forming instead a previously unknown genetic isolate that likely underwent an extreme and prolonged genetic bottleneck prior to settling the Tarim Basin.


“Archaeogeneticists have long searched for Holocene ANE populations in order to better understand the genetic history of Inner Eurasia. We have found one in the most unexpected place,” says Dr. Choongwon Jeong, a senior author of the study and a professor of Biological Sciences at Seoul National University.


In contrast to the Tarim Basin, the earliest inhabitants of the neighboring Dzungarian Basin descended not only from local populations but also from Western steppe herders, namely the Afanasievo, a pastoralist group with strong genetic links to the Early Bronze Age Yamanya. The genetic characterization of the Early Bronze Age Dzungarians also helped to clarify the ancestry of other pastoralist groups known as the Chemurchek, who later spread northwards to the Altai mountains and into Mongolia. Chemurchek groups appear to be the descendants of Early Bronze Age Dzungarians and Central Asian groups the from Inner Asian Mountain Corridor (IAMC), who derive their ancestry from both local populations and BMAC agropastoralists.


“These findings add to our understanding of the eastward dispersal of Yamnaya ancestry and the scenarios under which admixture occurred when they first met the populations of Inner Asia,” says Dr. Chao Ning, co-lead author the study and a professor of School of Archaeology and Museology at Peking University. 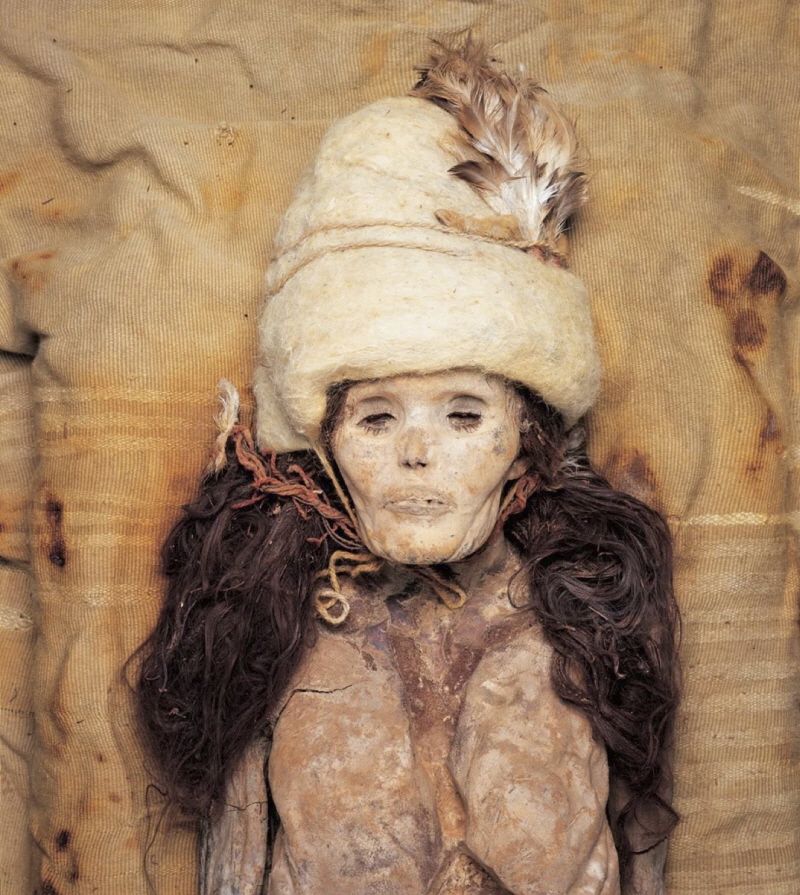 A naturally mummified woman from burial M11 of the Xiaohe cemetery.
© Wenying Li, Xinjiang Institute of Cultural Relics and Archaeology.


These findings of extensive genetic mixing all around the Tarim Basin throughout the Bronze Age make it all the more remarkable that the Tarim mummies exhibited no evidence of genetic admixture at all. Nevertheless, while the Tarim Basin groups were genetically isolated, they were not culturally isolated. Proteomic analysis of their dental calculus confirmed that cattle, sheep, and goat dairying was already practiced by the founding population, and that they were well aware of the different cultures, cuisines, and technologies all around them.


“Despite being genetically isolated, the Bronze Age peoples of the Tarim Basin were remarkably culturally cosmopolitan – they built their cuisine around wheat and dairy from the West Asia, millet from East Asia, and medicinal plants like Ephedra from Central Asia,” says Dr. Christina Warinner, a senior author of the study, a professor of Anthropology at Harvard University, and a research group leader at the MPI-EVA.


“Reconstructing the origins of the Tarim Basin mummies has had a transformative effect on our understanding of the region, and we will continue the study of ancient human genomes in other eras to gain a deeper understanding of the human migration history in the Eurasian steppes,” adds Dr. Yinquiu Cui, a senior author of the study and professor in the School of Life Sciences at Jilin University.

A profile view of the burial M13 from the Xiaohe cemetery.
© Wenying Li, Xinjiang Institute of Cultural Relics and Archaeology.