Share this to Kakao Talk Share this to Facebook Copy URL
This video shows how the chiral gold nanoparticles are created with amino acids and peptides and how they are applied in displays.

For the first time, scientists have successfully created optically active, chiral gold nanoparticles using amino acids and peptides. Many chemicals significant to life have mirror-image twins (left-handed and right-handed structures), a characteristic that is conventionally called chirality. This study describes how chirality, which is typically observed in organic molecules, can be extended to three-dimensional metallic nanostructures. This newly discovered synthesis method was described in Nature (April 19th) and was featured on the cover. 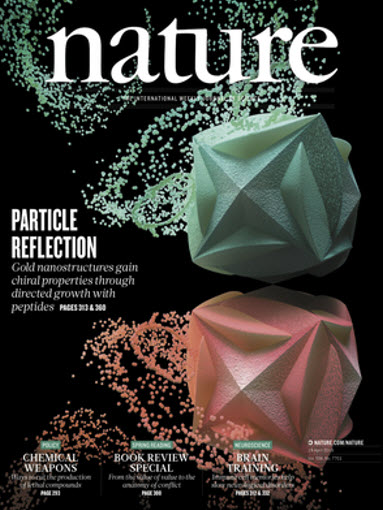 The Korean research teams at Seoul National University (SNU), Pohang University of Science and Technology (POSTECH) and LG Display (LGD) demonstrated the direct transfer of peptide handedness to nanoparticles’ morphology during their growth. Mirror-image peptide twins induced the opposite twist of the chiral nanoparticles, which are further tunable with sequence variation. The chiral gold nanoparticles with different handedness interacted differently with circularly polarized visible light, displaying extensive color modulation. As a result, color change is possible by controlling the light polarization, which has potential applications in future displays.

In newly synthesized gold nanoparticles, chiral elements are arranged on cube-like structures with a side length of only about 100 nm. They can be easily dispersed in solutions and deposited on the substrates while maintaining high chiro-optical activities.

“Based on our understanding of the interface between peptides and inorganic materials, we have built a new platform technology to control the crystallographic asymmetry,” explains Professor Ki Tae Nam at SNU, who led this collaborative project. He added, “This finding can make a direct and immediate impact on optical devices and could be further applied for the development of enantioselective bioinspired catalysts in the near future.”

This research was funded by the National Research Foundation of Korea under the Ministry of Science, ICT and Future Planning and the LGD-SNU Incubation Program.

[Figure2] Electron microscope image of synthesized chiral gold nanoparticles (left), where the chiral components are highlighted in blue, and a potential application in a color display as a three-dimensional polarizer (right).