SNU Soft Robotics Research Center led by Professor CHO Kyu-Jin at the Department of Mechanical Science and Engineering has developed an origami-inspired robotic arm that is foldable, self-folding and also highly-rigid. (The researchers include Suk-Jun Kim, Dae-Young Lee, Gwang-Pil Jung, Professor of SeoulTech)

The researchers developed a novel robotic arm using a concept of variable stiffness. The robotic arm made it possible to change the shape with a single wire, thus raising the possibility of practical use of the origami structure. The robotic arm is light-weighted, and can fold flat and extend like an automatic umbrella and even becomes instantly stiff.

The key principle is a collapsible locker and this enables the robotic arm to overcome the drawbacks of origami-inspired structures that is hard to withstand external forces and is hard to be easily actuated. The variable stiffness mechanism is based on an origami principle of perpendicular folding; two perpendicular fold lines constrain each other's movement. By using this principle, a hexagonal structure (40X40X100 mm) which weighs less than 30 g can withstand more than 12 kg of compressive load. On the other hand, the lockers can be easily unlocked and the structure is folded flat by pulling a single wire with a small force. Benefits of the foldable robotic arm can be maximized when it is attached to drones where the weight and the size constraints are the most extreme. In the video, the drone unfolds the robotic arm, picks up an object in the ditch, and films the trees. When the robotic arm is not in use, it folds flat for convenient maneuvering, easy take-off and landing. The proposed variable stiffness mechanism can be applied to other types of robots and structures in extreme environments such as polar area, desert, underwater, and space.

Professor Cho said, “Soft robots have great advantages in their flexible movement, but they have a limitation in that they cannot support high load without deformation. This robotic arm uses the variable stiffness technology which gains merits of both rigid and soft robots. With this property, the robotic arm can be folded flat when not in use and can be stiff when necessary. In addition, the arm is made of composite of tough ripstop fabric and specially handled strong PET film for the practical use.”

Q: How can the robotic arm fold and unfold with a single wire?
A: The wire path is designed to unlock the variable stiffness mechanism sequentially and then to fold the arm with the wire. When the wire is pulled with a motor, the force to unlock the variable stiffness mechanism and the force to fold the arm occur simultaneously. When lockers are wedged inside the module, the variable stiffness mechanism moves and unlocks the structure, making it flexible to be folded flat. Then the robotic arm starts to fold. This wire-driven actuation has a great advantage in scalability. It can be not only applied to one module but also to serially connected arm as shown in the video. When the wire is unwound, the module is extended by rubber band installed inside and the lockers are installed by the magnets. 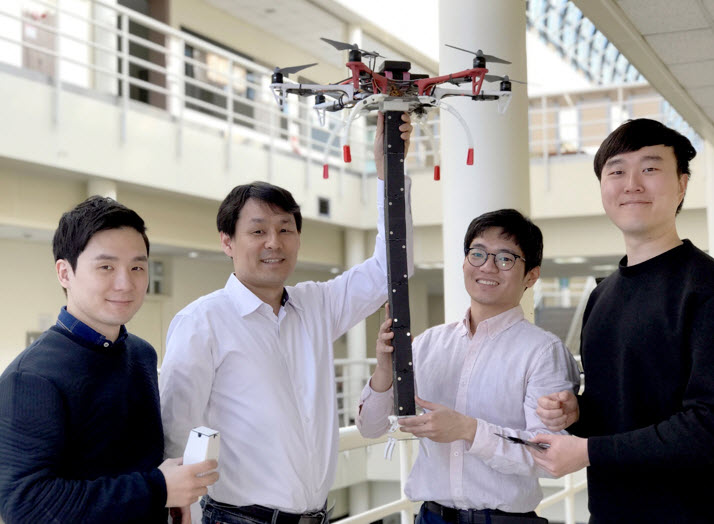 >> Professor CHO Kyu-Jin is the director of the Soft Robotics Research Center in Seoul National University. He received the IEEE RAS Early Career award in 2014 for his achievement in the field of soft robots and bio-inspired robots. In 2015, He developed the water strider robot published in the journal Science. In 2016, he presented the Exo-Glove Poly, a glove-like soft robot that helps people with disabilities in their daily lives, at the AAAS Annual Convention. In April of the same year, he won the Soft Robot Challenge with the robot named 'SNUMAX' which was held in Pisa, Italy for the first time.