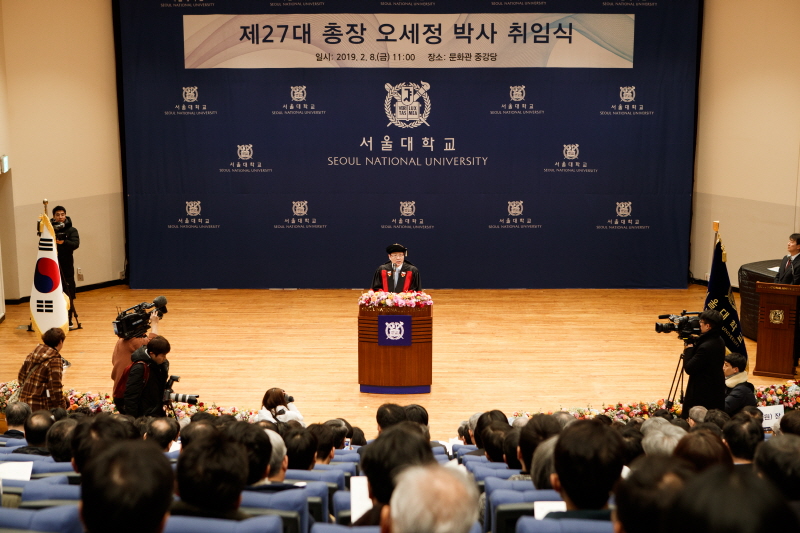 First of all, I would like to express my heartfelt gratitude to the former presidents of SNU, the president of SNU Alumni Association, members of the SNU Board of Trustees, the chair of the SNU Senate, the deans of colleges and schools, our faculty, administrative staff, and student representatives. In the past, it was customary to invite numerous distinguished guests to an inaugural ceremony, but today we have decided to have a short and simple ceremony. It seems more appropriate, given the long-term vacancy of the presidency and the urgency with which we need to return to normalcy. I would like to take this opportunity to express my gratitude to Vice President PARK Chan-wook, for his devotion while serving as acting president, and to the faculty who served along with him throughout this difficult time.

I stand here today to start the 27th presidency of Seoul National University. I am humbled by the task set upon me, to dedicate myself to our university for the next four years. As you know, SNU is celebrating its 73rd anniversary this year. SNU represents the Republic of Korea as its premier institution of higher education and has a proud tradition of leading our country’s development and prosperity. I believe it is my responsibility as the new president to continue this tradition and to build a foundation that will prepare us for a new leap forward.

However, the current situation we are in does not appear to be so favorable. Some are even saying that SNU is at dangerous crossroads. While different causes have been cited, if there is genuine reason for alarm, I believe the main problem is that SNU has fallen short somewhat of properly performing its primary role. We have not put forth enough effort to comprehend what this era and the Korean people expect from SNU and to satisfy these expectations. This is why, rather than blaming external circumstances, we first need to thoroughly examine ourselves.

First and foremost, I would like to reaffirm our fundamental understanding of the university as a ‘hall of intellectual virtue’. The university is a community within which intellect blossoms and outside of which the power of its intelligence extends into its surroundings and benefits society as a whole. Especially in times of trouble and uncertainty, the nation and its people look to universities as centers of excellence to provide direction and guidance by embodying impartial objectivity and fairness. But can SNU be confident it has met these expectations in recent years? We must frankly ask ourselves whether, as an institution where top intellectuals are gathered, our members are making invaluable contributions to the intellectual heritage of humankind, whether we are showing sufficient interest in and concern for the well-being of society as a whole, transcending our drive for self-interest. Most importantly, we must regretfully ask ourselves whether there are inappropriate activities taking place within our university that undermine the roots of our intellectual authority.

As a hall of intellectual virtue, a university advances its mission by lifting itself on the two wings of education and research. In the past, SNU trained our students in accordance with the demands and needs of the nation and our society. Our students, imbued with advanced knowledge and skills, went on to make great contributions to the industrialization and democratization of our country. However, this approach, which had been useful and appropriate in an era of rapid growth, is no longer effective. Now we must lead rather than follow. Instead of copying a set of answers to known questions, we have to prioritize the originality that flowers from diversity and the power of reason. In particular, we have to cultivate talented individuals who are capable of posing new questions rather than merely solving given questions and who have the flexibility to freely cross disciplinary boundaries. In addition to these intellectual qualities, our future leaders should have a comprehensive vision of their community and others, a warm heart, and a sense of team spirit that enables them to respect and work with others who hold different points of view. In other words, the future leaders we shall nurture here at SNU should be able to open new paths and walk them together with others. It is my aim to launch an innovative campaign in education to foster these leaders.

Through such efforts, I also intend to change the conventional wisdom about a good university. Instead of merely recruiting those students who have shown an aptitude for competitiveness, SNU will seek out those undiscovered pearls of talent from every corner of our nation and help them to realize their true potential. Departing from the current education climate in which universities compete with each other to find the best-prepared students, we will focus on providing a quality education to our students, thus living up to national expectations. A good university should be redefined as that which shapes and molds the talents who enter its gates through the best possible education, rather than that which merely makes a good selection of the already well-prepared students.

In terms of research, if we just consider the quantity of output, SNU is now competitive at the highest level. Qualitatively speaking, however, we have ample room for improvement. It is now time for more fundamental and original research: research that opens up new fields rather than following the work in existing fields. This requires us to keep a long-term perspective firmly in our minds, resisting the temptation to bring about immediate results measured simply through the metric of publication and citation counts. I will encourage our faculty to break new ground in research by stepping away from the quantitative framework that has hindered creativity and originality. In addition, I will encourage and support our members in various fields to collaborate to implement such original research to solve difficult problems facing Korean society as well as humanity as a whole, including aging, energy shortages, climate change/environmental degradation, and employment challenges brought about by the digital revolution. Such efforts will reveal that, even in terms of research, SNU will now evolve along with the society that supports it by carefully listening to its voice.

If SNU is to overcome its current challenges and gain national and international respect as a university leading the future, all of us must be ready to shed our old practices and seek new ways to bring about this new vision. In this sense, we must all be committed to fundamental reform. As a matter of fact, university reforms have become a global trend. Recent development in science technologies and political, social, and economic environments have made these reforms inevitable. Moreover, given the growing concerns that Korea is marching towards a demographic cliff faster than expected, demands to accommodate such challenges within our higher education system can no longer be delayed. As the leading institution of Korean higher education, SNU must embrace these challenges and lead the way at the forefront of educational innovation.

Reform is often accompanied by unfamiliarity and discomfort. I am confident, however, that our community’s members will accept and endure such difficulties to retain our society’s trust and recognition. I am confident because it is the true mark of the intellectual excellence of the SNU community that we are eager to and have the capacity to realize this goal of bettering ourselves and our institution. Through this positive attitude, unfamiliarity and discomfort will turn out to be blessings in disguise, stimuli for self-growth.

This challenge we willingly face will not be an easy challenge. There is, however, no need to be intimidated. Our members here at SNU are the best the nation has to offer. Moreover, facing new and difficult challenges is far from new to us. Looking back to the day on which our university was founded, it would have been hard to imagine us standing here today. Just as Korea as a nation has shown, SNU also has a proud history of overcoming difficulties that once seemed insurmountable. What we at SNU need right now is the courage and driving force our reality and implement the necessary innovations for our future. We must walk hand in hand to make concrete a university whose members feel proud for being part, a university that the Korean people take joy in, and a university that the world admires and wishes to emulate.

This task cannot be completed in 100 days, nor will it be finished in a year or two. Nor can I honestly guarantee that this mission will be accomplished within my term. But someone has to begin. And this new beginning cannot be delayed. Thus I start today and will do my utmost for the next four years to accomplish this task. While I, Oh Se-Jung, an individual may be weak and powerless, I believe, as the 27th president of SNU, my pledge possesses genuine significance and real power, because of all you and the whole institution of Seoul National University stand behind me. So please join me in taking our first steps together today toward the journey for SNU’s new future.